What key trends are we seeing in the simulations market at the moment?
Kenneth Duck: A combination of the withdrawal of combat troops from Iraq, the drawdown in Afghanistan and the reduction of US and European military budgets means there is a strong need to continue providing and maintaining the combat skill sets that military
forces require. We are also seeing a broad international consensus from our customers, including in the US, that there are not enough hardware resources or money in military budgets to conduct as many live training events as in the past.

On a technical level, what sort of challenges is the sector facing?
One of the key issues is in providing effective joint terminal attack controller (JTAC) training.
This form of training requires a simulation that combines skill sets normally found in many diverse simulator systems - for example, fixed-wing and rotary-wing aircraft, artillery, small arms, unmanned aerial vehicles, communications for command and control, and emulated equipment such as laser range finders and laser designators.
All these must exist in a single trainer. This is the strength of MACE; with just one SAF, all these requirements are met.

Could you elaborate a little on what MACE can do?
MACE is a physics-based, many-on-many simulation with a large order of battle, ideally suited for stand-alone mission rehearsal and distributed mission simulation for air, land, surface and electronic warfare applications.
MACE's virtual controls have been designed to be very user-friendly, yet powerful enough to build a simple or complex scenario.
In the simulation industry, there are a variety of terms used to describe software like MACE - CGF, SAF and entity (or environment) generator. Regardless of what you call it, we know of no other competing product that can simulate the battlespace as holistically as we are striving to do with MACE.
While all our customers are important to us, those currently helping to steer MACE development are our JTAC clients, the Air Force Research Laboratory (with which we have a cooperative research and development agreement), the POLYGON electronic warfare range, and the Naval Strike and Air Warfare Center.
Our two hubs for distributed training in the US are the Distributed Training Operations Center and Distributed Mission Operations Center.

How is MACE different from other SAF applications?
MACE clearly separates itself from competing government and commercial off-the-shelf CGF/SAF applications by providing a full-spectrum capability at a very low cost. Several other key features also mark it out from the competition. First is the ability to simulate the electromagnetic spectrum, which is key for creating contested battle spaces. A fighter aircraft's main beyond-visual-range sensor is its radar. Does your SAF articulate radar scans, or simulate a simple 'scan volume' - does it even simulate the airborne radar at all? Can you define the radar beam, scan and pulse patterns? Can you add a self-protect jamming pod to your airborne entities? Can you simulate noise jamming? Can you simulate an enemy-integrated air defence system? What about countermeasures? Do radar detection algorithms support 3D RCS values, so that you can accurately simulate detection vs low-observable targets?
Second is being able to switch entity control between constructive (computer) and virtual (person-in-the-loop), which all simulated platforms in MACE can do. You can take control of and fly an F-16 (for example, to shoot a missile at a target in support of a strike mission). Seconds later, you can be an insurgent with an SA-7 missile attacking that same F-16 (which is now back under constructive control), or flying a helicopter, or even acting as a soldier riding inside that helicopter, or a tank, or any other vehicle.

What key benefits can MACE bring to its customers?
MACE has a true geographic information system core that supports industry-standard raster and vector formats to provide a truly worldwide battlespace. Furthermore, it allows map data sharing with FalconView, a popular mission-planning application in the US, which is also used by many of our NATO partners.
Often, MACE customers find they can completely replace multiple software applications they were previously using, because competing products do not have the full-spectrum kinetic and non-kinetic capabilities we have built in. A testimonial we are particularly proud of came from a US Army special ops customer, who declared: "MACE is our Swiss Army SAF".
We also pride ourselves on the high marks we get for service and support. In addition to MACE, BSI offers a low-cost, PC-based DIS radio that supports up to 100 simultaneous transmit/receive frequencies and DIScord - a DIS recorder for after-action review and debrief.
Finally, users should be able to add new content to their simulation, which some of our competitors reportedly make difficult by trying to monetise everything.
This is not our business model. We've created a toolset for our MACE customers allowing them to fully extend
the MACE order of battle. This not only includes new platforms and weapons, but also aerodynamic models, radar beam and scan and pulse data.

Do you have any other products that would be of interest to our readers?
BSI's VIPER DIS radio simulation is a low-cost, reliable alternative to more expensive server-dependent DIS radios.
VIPER supports up to 100 simultaneous transmit and receive frequencies, VOX and push-to-talk, half-duplex operation and propagation loss.
Separate PRC-117G and PRC-152 skins are available for VIPER. Skins include functional menus for the most commonly used features.
BSI offers an API for VIPER that includes a visual studio solution with four projects, including one that uses VIPER, as well as the Microsoft speech recognition and synthesizer engines to receive DIS audio and reply back over DIS with synthesized speech.

Do you have any interesting new projects in the pipeline?
BSI has several unmanned aeriel vehicle system (UAS) projects in the works.
When combined with an image generator such as MetaVR's Virtual Reality Scene Generator (VRSG), MACE is ideally suited for stand-alone or distributed UAS training. MACE has a very large entity library, including both military and civilian entities that can quickly be added to a UAS training scenario.
MACE's energy-based flight models drive the UAS's flight as the UAS flies from waypoint to waypoint, or as the pilot makes commanded changes to airspeed, heading or altitude. The camera can ground or entity track, and VRSG supports visual, EO and IR (white-hot and black-hot) camera filters.
Weapons employment from the UAS is also fully supported and users can even add their own UAS platforms and weapons to the MACE entity library.

How do you see military simulation technology evolving over the years to come?
The drive will always be towards increasing fidelity and user extensibility, lowering maintenance costs and improving interoperability with live, virtual and constructive environments. Also, the ability to simulate contested environments will always be pivotal. BSI will stay focused on these targets. 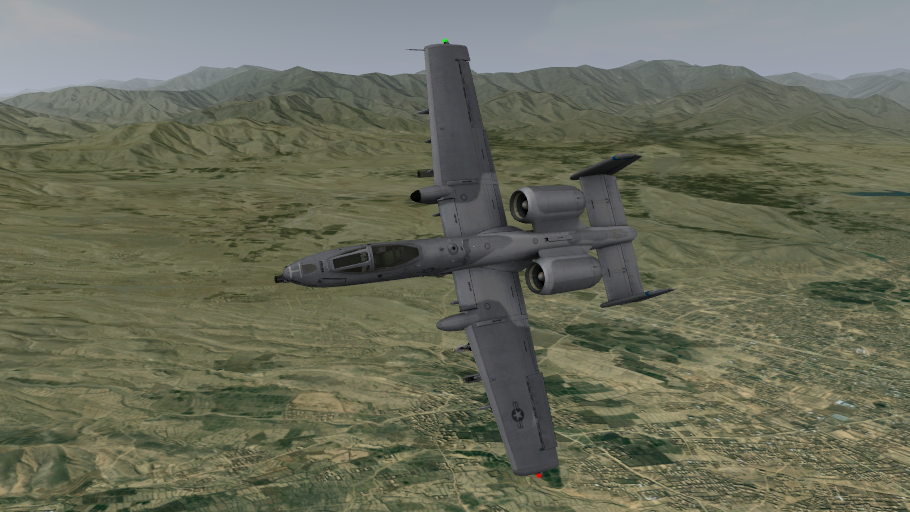 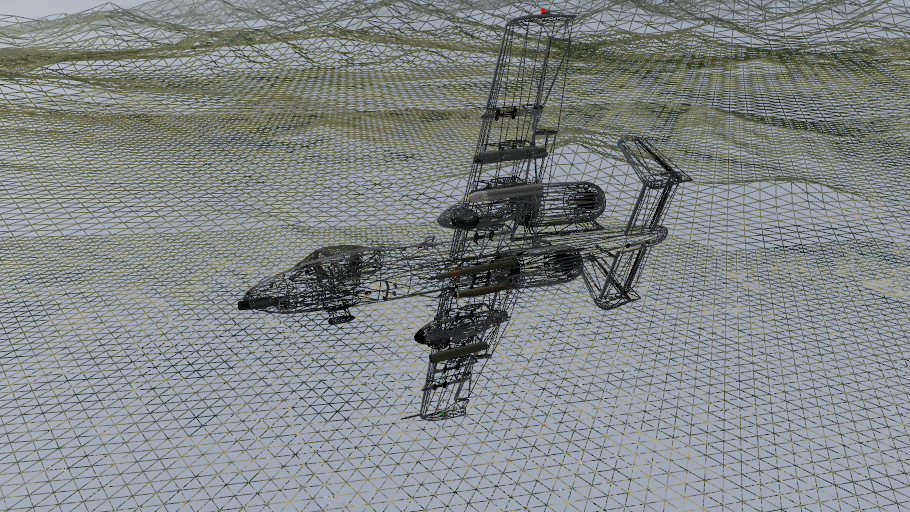 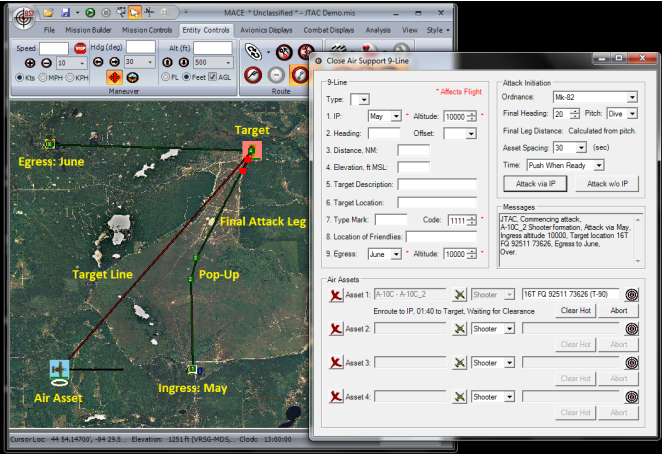 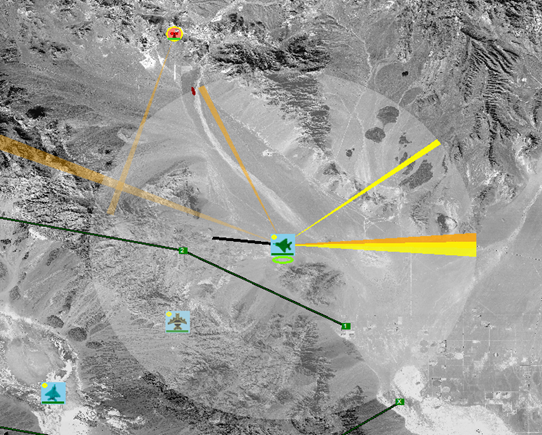 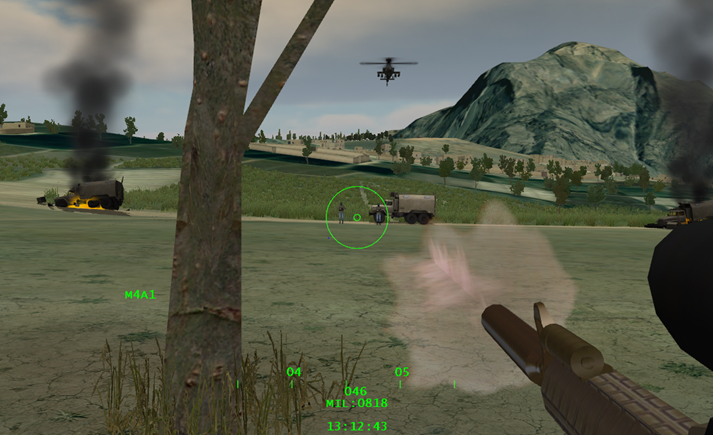 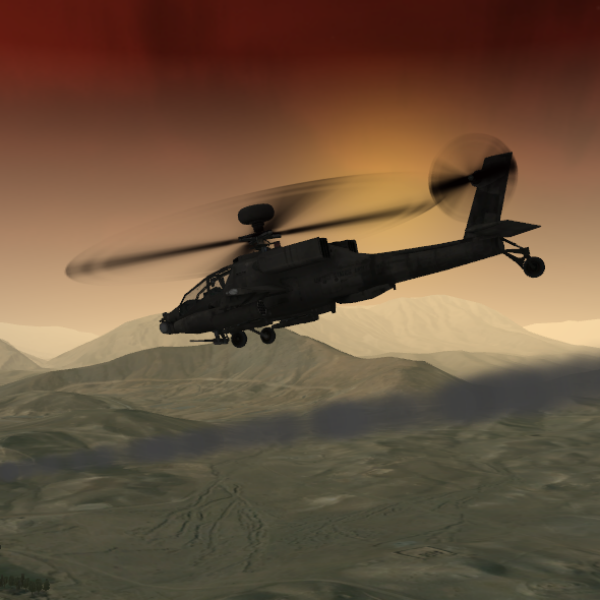 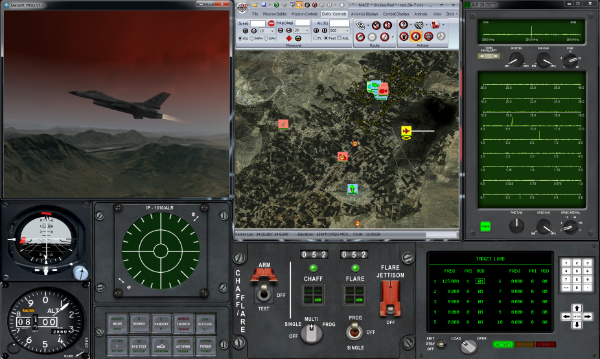 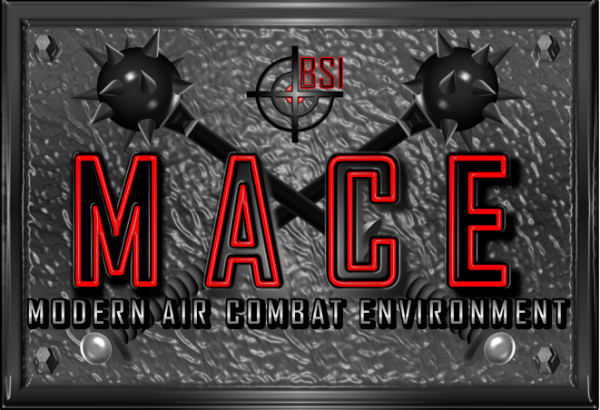 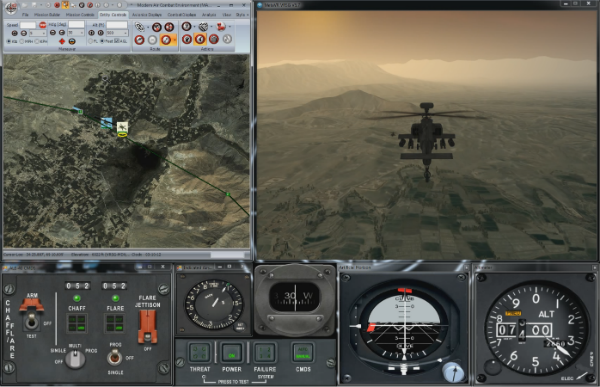