What is the story behind MOIS?

Risto Saimla: At the turn of the 21st century, when we received our first minehunters of former German Navy Lindau-class, the data system used for mine warfare data handling on board was outdated. There was no support available and, due to a limited budget, we didn't envisage a major upgrade, so we started to look for an affordable replacement.

We knew that R-Systems had done work for a national Hydrographic Office (HO) so we approached them and, as a consequence, the concept of Minehunting Operations and Information System (MOIS) was developed in 2001. Basic functionality to support minehunting was achieved within a year. All aspects related to the execution of the track plan generated, and reporting functions were supported. MOIS was adopted as the primary minehunting information-management tool on Estonian Lindau-class in 2003. In 2006, the Lithuanian Navy adopted MOIS on its Lindau-class minehunters. MOIS has been under continuous development, and additional functionality has been added through the years (the ability to capture video from remotely operated vehicles, support to side-scan sonars and data exchange with ECDIS, for example).

What is innovative about MOIS?

The most innovative part of MOIS is the early adoption of additional military layers - small bottom objects (AML SBO) at the core of contact-management solutions in a rather unique way. Instead of providing simple read functionality of the AML SBO, R-Systems has developed a database of objects and attributes capable of managing a range of versions of AML SBO. This enables end users to handle AML SBO data independent of the version of product specification and functionality to import/export contact data directly from a database. One of the obvious benefits of MOIS, is that it has been designed to work on open-source software (Linux) from the beginning. This is a significant advantage in cost and flexibility.

How has MOIS proved itself?

Adoption of MOIS solved the issue of outdated data handling system on board Lindau-class and introduced some unique and innovative solutions. Development of MOIS has always been a straight forward and flexible process. Despite being a small company with limited human resources, additional functionality requests by end-user, and interfacing with additional sensors and systems, have been solved in a rapid and practical manner.

Lindau-class ships have now been decommissioned. What about MOIS?

Lindau-class ships were decommissioned in 2007-08, when we acquired Sandown-class single-role minehunters from the UK. Nautis-M - mine countermeasures command and control system (MCM C2) on board Estonian Sandown-class - has the functionality required but is outdated, so, in essence, we have the same problem we ran into on Lindau-class. Given the challenges, an interim pragmatic choice to retain MOIS as a secondary, back-up system has been made, and this solution has so far justified itself. R-Systems has put significant effort into interfacing MOIS with the ship's sensors, and as we also use side-scan sonar, MOIS is the main application to support side-scan sonar operations.

Are there other options you are considering?

The Estonian Navy is currently in the process of preparing a major upgrade for the Sandown class. Hence, we are in negotiations with multiple global actors in the naval mine warfare market segment. Despite this, it has to be highlighted that in the lightweight category, MOIS is a strong alternative that should not be neglected. With additional effort, the full potential of MOIS as a functional MCM C2, could be realised within a short time.

Speaking of IT solutions, we often hear of misunderstandings between the client and the service provider. What do you think of this?

In many cases, this is one of the most challenging areas, and compromises are hard to find. But, one could argue that the problem becomes a constructive dialogue once there is trust between the parties. Based on our long experience working with R-Systems, we are confident that they live up to the commitment, and deliver a working solution in a proactive and flexible manner. 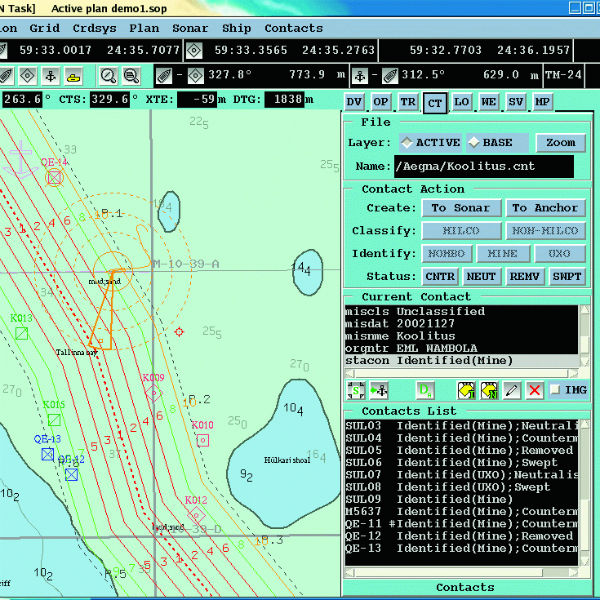