Head-up displays (HUDs) have revolutionised the way pilots operate, enabling quicker decisions and distinct tactical advantages in combat. Constantly evolving, the technology will play an essential role in the next generation of fighter jets. Irenie Forshaw investigates the latest HUD developments and what may be in store for the cockpits of the future.

Anyone that grew up playing video games will be familiar with a head-up display (HUD), the on-screen method by which vital statistics including health, ammunition and time are visually relayed to the player. The earliest versions of the real technology were developed for fighter jets during the Second World War. Pilots were struggling to locate targets solely from the verbal instructions of their crew and needed a way to view navigational information without taking their eyes off the flight path. However, these initial prototypes were static, which made it difficult for pilots to adjust their sight from the bright display screen to the dark night sky.

A major technological breakthrough came with BAE’s HUD, designed for the low-level strike Blackburn Buccaneer aircraft in 1958. The ‘Strike sight system’ was developed to combine airspeed, altitude and the bombsight into a single display. A transparent screen in front of the pilot in the cockpit showed all of the critical information needed to safely fly the aircraft and complete missions. No longer necessary to look down at the controls, the pilot was able to focus their full attention on the horizon.

These early models used cathode ray tubes (CRT) to project the data through a system of lenses and superimpose it on to the pilot’s view ahead.

Sweden’s AJ 37 Viggen (‘Thunderbolt’) also led the way as one of the most advanced designs of its time. Built at the height of the Cold War in the 1960s, the aircraft featured the latest HUD technology that guided pilots to pop-up points, allowing them to approach targets at low altitude and pull up at the last minute to release bombs. It wasn’t until several years later that Italy, Germany and the UK developed the Panavia Tornado, which had a similar automatic terrain-following radar.

Sweden is still one of the leading players in the global combat aircraft market and recently became the first nation to join the British ‘Tempest’ sixthgeneration fighter programme. Keen to maintain a technological edge, the more traditional cockpit display is replaced in this jet by a virtual HUD projected through the pilot’s helmet. The project, which has already been pledged £2bn from the UK government, is being led by BAE Systems, missile maker MBDA, Rolls Royce and the UK arm of Leonardo.

By the time the Tempest is in service, it seems likely that Sweden will have similar military requirements to the UK. “With a much more assertive Russia on their doorstep, the Swedes may well look at their capability requirements for 2040 and beyond, and decide they need something much bigger than the Gripen,” Doug Barrie, the senior military air analyst at the International Institute for Strategic Studies think tank, told Defense News.

“Due to advances in aerodynamics and automation, the handling of the aircraft is almost becoming a secondary issue. The role of the pilot moves more into mission management: it’s about decision-making.”
Mark Bowman, BAE Systems

Having developed the world’s first HUD in operational service, the technology is a key part of BAE’s heritage, and the company continues to play a central role in the latest innovative HUD solutions. Building new fighter jets is no easy task, and designers must consider the needs of the next generation of pilots.

“At the moment, I’m looking out to at least 2040,” Mark Bowman, chief test pilot for BAE Systems at Warton, Lancashire, told BBC Future. “Due to advances in aerodynamics and automation, the handling of the aircraft is almost becoming a secondary issue. The role of the pilot moves more into mission management: it’s about decision-making. Therefore, we need to look at what technologies are out there that are going to improve his ability to do that.”

With this in mind, BAE has upgraded the US Air Force’s F-22 Raptor jet fighter HUD into one that is entirely digital. The upgrade removes the CRT image source and instead uses Digital Light Engine (DLE) technology to implement a more advanced HUD that is placed immediately in front of the pilot’s line of sight.

“The F-22 is a premier fighter aircraft and its pilots deserve the most advanced situational awareness technology available today,” explained Andy Humphries, director of advanced displays at BAE systems in a press release in 2017. “We’ve worked closely with Lockheed Martin to deliver a completely modernised HUD solution for the F-22 fleet that meets the long-term needs of the Air Force.”

The company has also been integrating the new DLE HUD into the F-16 Fighting Falcons for the UAE Armed Forces. The technology is compatible with existing aircraft interfaces, making upgrades relatively straightforward. With a wealth of experience in developing digital projection systems for military applications, aircraft engineer Raytheon is designing and manufacturing the projector. Modernising HUD systems has significant benefits. “By removing the conventional analogue system, we’re able to increase the HUD’s reliability and decrease obsolescence issues, which all lead to lower life-cycle costs,” explained Humphries.

One unique variant of the UAE’s Block 60 F-16 E/F ‘Desert Falcon’ has been upgraded with a wide-angle HUD and holographic video-projection capability. What appears at first glance to be an unusual lump on the end of the Lockheed Martin aircraft’s nose is a specially designed FLIR system that rotates around to point directly forward. The video stream is sent directly into the pilot’s HUD to give a clearer view of the flight path ahead, especially at night or in bad weather.

In parallel to this, BAE has developed the ‘Lite HUD’, a compact system that it says is half the weight of conventional HUDs and takes up 60% less space. Optical waveguide technology replaces the bulky components of its predecessors and displays higherresolution imagery. The new system is designed to fit into the cockpits of smaller aircraft that previously didn’t have the space and those of future fighter jets. Qatar’s F-15 Eagle, for example, is finally getting a new cockpit and replacing its existing wide-angle HUD with the sleeker design. The Scorpion jet, Hawk trainers and AC-130 Gunship have also incorporated the system into their existing aircraft.

Looking forward, helmet-mounted display (HMD), which transfers the fixed HUD inside the pilot’s helmet, may play an increasingly important role in the next generation of fighter jets. Rockwell Collins and Elbit Systems of America have developed the F-35 HMD, with a hefty $400,000 price tag. The helmet is custom fit to each pilot, allowing them to see the display even during high-G manoeuvres.

Naturally BAE has developed its own Striker HMD that integrates night vision and target tracking technology into a visor-projected system. “Designed to address evolving mission requirements, our new HMD was built to be future-proof and seamlessly adaptable to technology advancements in the years ahead,” said Joseph Senftle, vice-president and general manager for communications and controls solutions at BAE in a 2014 press release. As a result, pilots are able to benefit from high-precision target tracking and increased situational awareness.

Having been denied access to information about the HUD the UK, US, France and Israel have been working on, India took matters into its own hands and decided to develop the technology from scratch. The Central Scientific Instruments Organisation (CSIO) in Chandigarh, India, has been leading the project, developing a plot display unit and HMD that they believe are technologically superior to their global competitors. “CSIO customised its design to multiple aircraft platforms, in the process achieving design excellence, bringing India on the select list of countries who can design and manufacture the complex technology of HUD,” claimed the director of the CSIO, Professor RK Sinha at the time.

“CSIO customised its design to multiple aircraft platforms, in the process achieving design excellence, bringing India on the select list of countries who can design and manufacture the complex technology.” Professor RK Sinha, CSIO

Meanwhile, China and Russia have been battling it out in the design of their fifth-generation of fighter jets, both of which feature a wide-angle HUD. China confirmed that the newest variant of its JF-17 Thunder Block III, developed with Pakistan, made its first test flight in Chengdu in December.

Russia took things one step further, revealing in June that its Sukhoi Su-57 fifth generation combat aircraft also uses technologies being developed for sixth-generation fighters making it a ‘breakthrough’ design. According to Russia’s Sputnik news agency, the development of an unmanned piloting mode is already in progress, enabling the aircraft to withstand extreme G-forces that previously would not have been possible.

As HUD technology continues to make rapid developments, it is difficult to predict what future fighter cockpits will look like, or whether pilots will even be present. Aircraft that incorporate the latest technology provide some useful clues. Countries around the world will continue to push boundaries, competing to have the technological edge. If the advances from the past 80 years are anything to go by, an exciting future lies ahead. 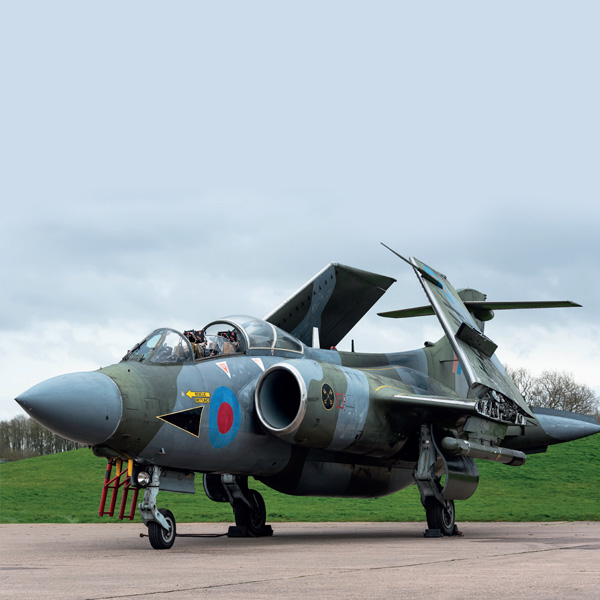 BAE’s ‘Strike sight system’, designed for the low-level strike Blackburn Buccaneer aircraft in 1958, combined airspeed, altitude and the bombsight into a single display. 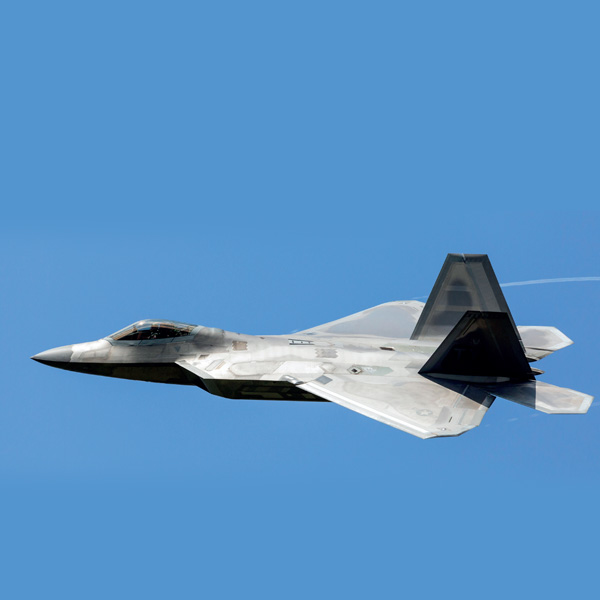 BAE has upgraded the US Air Force’s F-22 Raptor jet fighter HUD into one that is entirely digital. 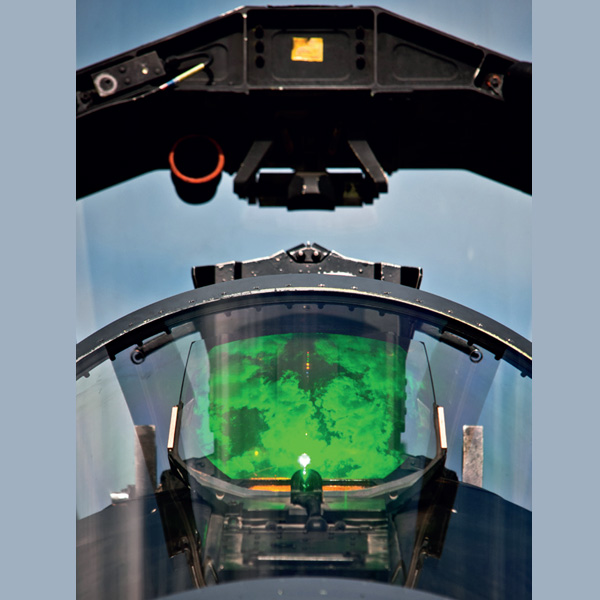 Qatar’s F-15 Eagle is replacing its existing wide-angle HUD with a sleeker design. 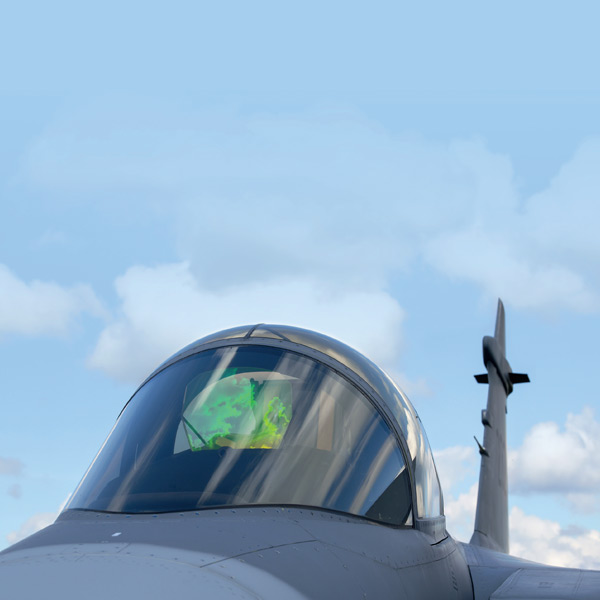 HUD visible in the cockpit of a modern tactical jet fighter.
Post to: