Swept away - Automated minesweeping, keeping personnel out of danger

Minesweeping is one of the most thankless missions undertaken by modern navies. Advances in underwater drone technology, however, promise to automate this repetitive and dangerous task.

Minesweeping is one of the most thankless missions undertaken by modern navies. Advances in underwater drone technology, however, promise to automate this repetitive and dangerous task. Greg Noone talks to Captain Pete Small, programme manager for unmanned maritime systems at the US navy’s Program Executive Office for Unmanned and Small Combatants, and Margaret Kosal, an associate professor at the Sam Nunn School of International Affairs, about whether the days of the conventional minesweeper are numbered.

The US has enjoyed a long and complex relationship with the naval mine. Its first deployment of such a device took place in August 1777, under the supervision of amateur inventor David Bushnell. A graduate of Yale College and enthusiastic submariner, having already built a spherical craft designed to attack British warships from beneath the waterline, Bushnell demonstrated his vision of a naval mine to members of the Connecticut Council of Safety: a wooden bottle filled with gunpowder, placed four feet underwater and directly beneath a hogshead barrel loaded with stones.

Bushnell lit a fuse, and waited. “A match put to the priming exploded the powder with great effect, splintering the wood plank, demolishing the hogshead, and casting the ruins of the hogshead, stones, and a column of water many feet in the air,” he would later write. Satisfied with his experiment, Bushnell sought a more practical demonstration by sinking HMS Cerberus, then at anchor in nearby Black Point Bay. This attack failed when sailors aboard the frigate spotted the floating line used to trigger the explosives. The mine’s facility as a weapon, however, was proven when a passing schooner accidentally triggered one after lifting it out of the water, blowing the vessel apart and killing three sailors.

Shortly afterwards, HMS Cerberus would sail away from Black Point Bay to warn the Admiralty of a new and mischievous weapon, inadvertently helping Bushnell succeed in his objective of forcing a halt to the frigate’s blockade duties. The incident was a useful demonstration of the naval mine’s potential in impeding the progress of the world’s most powerful navy, proving itself a powerful weapon in the hands of a militarily weaker opponent incapable of challenging the UK on its own terms. American naval strategy has changed markedly in the past 243 years. Rather than being occupied with the protection of its coastal waters from foreign attack, the US is presently involved in projecting its naval power around the world, protecting its interests abroad and keeping sea lanes open for international trade. As such, it is more equipped to sweep mines than lay them, the former a role assigned to its small fleet of Avenger-class vessels and Sea Dragon helicopters. The task is an important one: 15 out of the 19 US navy warships that have been sunk or disabled since the end of the Second World War were struck by mines.

There is one small problem, however: the US navy’s contingent of minesweepers is rapidly ageing, to the point where some question whether these ships are fit for purpose. Originally built between the 1980s and 1990s, a report by ProPublica recently revealed a disproportionate number of these ships spend the majority of their time undergoing repairs, which often require spare parts that are no longer being manufactured. “[O]ne ship,” the article continued, “spent so much time tied up at a pier in Bahrain, sailors joked it was actually a building.”

The Avenger-class ships are due to be decommissioned by 2025. By that time, the US navy hopes to have replaced them with the Littoral Combat Ship (LCM), a multipurpose vessel hosting its own sophisticated suit of mine countermeasures (MCM). These include new unamnned vehicles, driven either remotely by a human operator or capable of acting autonomously to detect undersea mines. It is by relying on these robotic craft that the US navy hopes to counter the threat posed by underwater explosives that grow more sophisticated by the day – thereby restoring its strength in an area of operations it has long neglected to prepare for.

Captain Pete Small began his career in the US navy operating submarines. Around 18 years ago, however, Small started designing and building them, in addition to other undersea systems. “I struck gold from a timing perspective,” he says of his present role as programme manager for unmanned maritime systems for the Program Executive Office for Unmanned and Small Combatants. “I came into this job just as the navy began to acknowledge the role of unmanned technology in the future fleet architecture.”

This is particularly true of minesweeping, in many respects an area of operations ripe for automation. Currently, most mines are cleared by divers after having been detected by Avenger-class vessels; more dangerous areas, meanwhile, are ‘swept’ by a special wire dragged behind the ships or Sea Dragon helicopters, which attracts and dislodges the devices before they are individually disarmed or destroyed. Such operations are slow, meticulous affairs and require the use of dedicated personnel that naval planners would rather employ elsewhere.

Nevertheless, says Small, the US navy remains more than accomplished at minesweeping, which still mostly consists of disarming older contact and influence mines. “However, several countries have very robust, technically advanced mining programmes and are selling these technologies to third-world navies and non-state actors,” he explains. “These newer technologies are taking advantage of the acceleration and miniaturisation of processing technology that have reduced the effectiveness of certain mine countermeasure techniques.”

According to Small, unmanned mine hunting systems could serve as the antidote to this proliferation of sophisticated technology. Not only could the US navy cease putting sailors into harm’s way during such operations by using a fleet of robotic craft to do the same job, but could also allow it to adapt more quickly to the rapid evolution of the naval mine itself.

“Today, we closely involve the operator in the loop to adjust the mission appropriately, based on real-time feedback they are getting,” says Small. “As our systems become more ‘intelligent’ from [machine learning] algorithms, we will be able to allow the systems greater autonomy, resulting in the ability to operate longer and further from its parent command.”

The US navy has considered fielding several prototype unmanned (MCM) systems, including the Unmanned Influence Sweep System (UISS), a surface vessel designed to target magnetic and acoustically-triggered mines, and the evocatively-titled Barracuda Expendable Mine Neutralizer, a cylindrical underwater unmanned vehicle (UUV) capable of destroying underwater explosives. The vehicle closest to active deployment, however, remains the Knifefish UUV. Designed for use aboard the LCS, the drone resembles a miniaturised torpedo, and was built to use sonar to detect the make and model of mines placed on the seafloor that would otherwise be found by specially-trained marine mammals working with human divers.

“Navy rule of thumb is to hunt when you can and sweep when you must,” explains Small. “Knifefish has been developed to expand the navy’s capability to hunt mines in areas that were classically considered un-huntable, and therefore had to be swept.”

In August 2019, it was announced that the US navy would purchase 30 Knifefish drones for use on MCM operations. Small is nothing if not enthusiastic about the part he has played in perfecting the US navy’s minesweeping capabilities. “I have been provided tremendous resources, support and authority to set us on a path to take unmanned technology out of the research and development world and lay plans to develop it at scale,” he says. “I get to be at the leading edge of an effort to transform the way the navy fights; just as the Aegis Weapons System, submarine-launched ballistic missile, nuclear power and naval aviation programmes did.”

It’s an ideal solution for US navy planners concerned at the risk of fielding an ageing conventional minesweeper fleet, says Margaret Kosal, an associate professor at the Sam Nunn School of International Affairs at the Georgia Institute of Technology. “If one uses an automated mine countermeasures system, then one can potentially reduce the time that it takes to do the de-mining,” explains Kosal.

Questions remain, however, on how such unmanned MCM systems will be integrated into the wider fleet. For one thing, it isn’t yet clear if this technology could easily be deployed from more conventional surface vessels, like frigates and destroyers, and therefore render obsolete the US navy’s dedicated flotilla of minesweepers. That was at least the intention behind the LCS, itself equipped with MCM capabilities. Commissioned in the mid-2000s, it was only in 2018 that the US navy actually awarded the LCS’s anti-mining feature ‘Initial Operations Capable’ status.

Kosal sees parallels in the future of minesweepers in the US navy in the debate over the US air force’s A-10 ‘Warthog’. Rolled out in 1977 as a close air support jet, defence planners did consider replacing it with newer models, perhaps even drone variants. Eminently suited to neutralising ground targets, however, the US Department of Defense eventually decided that the plane wasn’t broken in any sense of the word, and therefore did not require fixing. The same could be said for the US navy’s minesweepers which, like the Warthog, might be old but are still ideally suited to the task which they were designed to perform.

Another area that remains unclear is whether unmanned mine countermeasures could change the rules of engagement in seaways easily contested using mines, like the Persian Gulf. By deftly disarming mines more quickly, and at much less risk to human life, could the use of such vehicles persuade US adversaries to use alternative asymmetric platforms that are harder to defend against? Kosal thinks not. Ultimately, she says, “You’re lowering the risk of an incident in which a US ship is impacted by a mine, or a commercial ship is impacted by a mine,” thereby triggering a series of confrontations that could spiral into war.

Even so, it is easy to imagine US adversaries adapting to robotic minesweepers, imbuing their own underwater explosives with enough artificial intelligence to move and hide themselves from unmanned vehicles, or rendering them inert using sophisticated signal jamming equipment. By that point, what will have started as a means to pluck flesh-and-blood servicemen from a dull and dirty duty could become its own arms race – one whose course may prove difficult to chart. 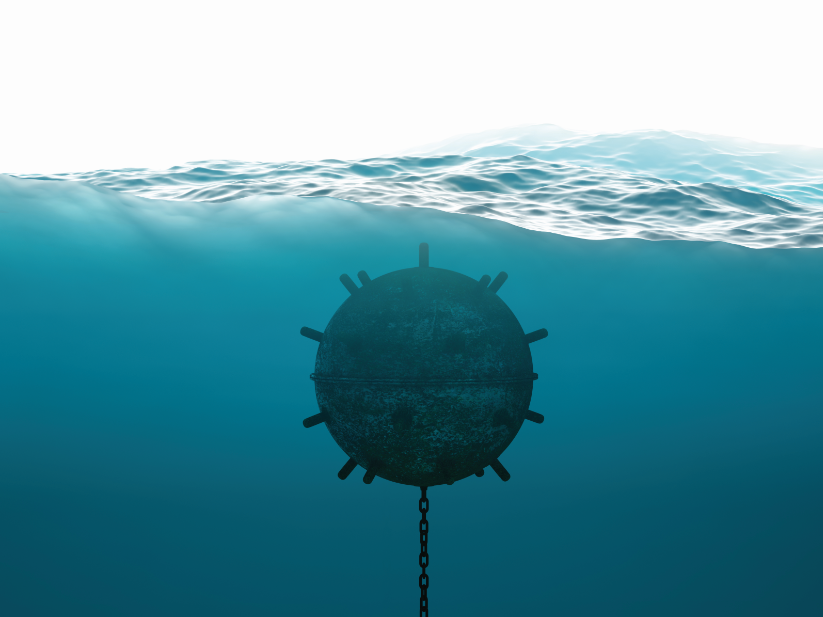 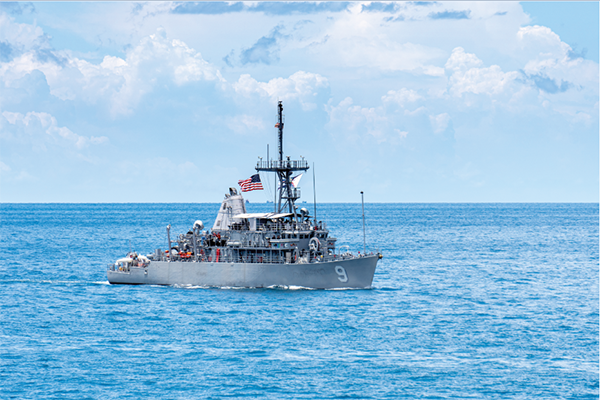