As Germany expands its international commitments, making sure its army’s infantry are kept in top-of-the-line equipment is essential. At the forefront of these efforts is the Infanterist der Zukunft programme, also known as Gladius.

Following the UK’s vote to leave the EU in June, the implications for European foreign and security policy are open to question. With the UK on course to downgrade its role, other member states are considering the extent to which they need to step up their commitments and allocate more resources to overseas missions.

Nowhere is this more the case than in Germany, the EU’s largest economy. Just five days after the Brexit vote, German Parliament’s Commissioner for the Armed Forces Hans-Peter Bartels said: “Germany now has even more responsibility.” In September, Jean-Marie Guehenno, president of the International Crisis Group, argued, “Germany should not shy away from a more proactive posture, including more frequent overseas projections of force, provided it is grounded in the rule of law.”

However the pieces ultimately settle, it seems likely that Germany will soon be playing a more overtly active role on the world stage. Its army’s infantry will, therefore, need to be kept in top-of-the-line equipment.

Over the next few years, the country’s Gladius programme is likely to prove a major point of focus. Previously known as Infanterist der Zukunft (IdZ, translating to ‘future soldier’), this programme is geared towards full-scale military action, peacekeeping operations and humanitarian relief. Its developer, Rheinmetall, has described it as the most advanced soldier system of its kind.

To understand what Germany is trying to achieve with Gladius, it is worth backtracking to July 2004, when the German Government placed its first order for IdZ kits. Worth €10 million, these 15 integrated soldier systems were intended to be deployed in Afghanistan, and had been successfully trialed in Kosovo.

Later that year, EADS Defense Electronics was contracted to provide the armed forces with additional equipment.

A total of 1,600 IdZ systems were delivered between 2006 and 2007 for deployment in Afghanistan, Kosovo

and the Democratic Republic of Congo. The systems had some crossover with the Land Warrior infantry equipment that was being developed in the US.

In 2006, a new contract was awarded to Rheinmetall Defence. It was tasked with developing a second version of IdZ, which is known as IdZ-ES (expanded system).

Six years later, following several evolutions and studies, the first batch of IdZ-ES soldier ensembles – sufficient to equip 300 riflemen – was handed over to the German army. The name had been changed to Gladius, Latin for sword.

When these systems were first used in combat in mid-2013, an industry commentator described them as “another turn to the virtual”, blurring the boundaries with video games through their incorporation of a real-life ‘heads-up display’. Suggesting that information was more important than firepower on today’s battlefield, he concluded: “The notion underlying the Gladius soldier system is that a super-informed team of ten is exponentially more lethal (and likely to survive) than an ill-equipped group many times its size.”

This conclusion stands to reason. Gladius is a high-tech, modular ensemble of weapons and equipment, comprising a radio, batteries and GPS module, along with a light body-armour component and a core computer

within a specially designed electronic backpack. Soldiers can be equipped with a spotting scope, laser-light module and thermal imager, and can use weapons such as a G36 assault rifle, AG36 grenade launcher, G82 rifle and MG4 light machine gun. They are protected against small-calibre arms, and nuclear, biological and chemical agents.

Its most notable feature, however, is the helmet, which incorporates a digital magnetic compass, night goggles, headset and a built-in display with an augmented-reality system. This allows the squad leader to build a complete picture of the terrain and the enemy positions, greatly improving situational awareness: ‘Google Glass for combat’.

The system enables soldiers to exchange information in real time – not just with each other, but also with vehicle units and relevant networks. Each system is designed for ten-strong infantry squads, their transport vehicle functioning as a kind of ‘mother ship’ linking the squad to a larger network.

Communication is paramount. The radio facilitates data and voice simultaneously, and can be operated without requiring the soldier to lower his weapon. This means he can receive instructions from his commander, for instance, while engaging targets with his rifle. Importantly, the system is designed for use in challenging conditions – rough or urban terrain, poor visibility and unfamiliar climates, for example – increasing its suitability for modern warfare. The intended user needs to perform a set of highly mobile, probably dismounted operations, meaning his equipment should be not just multifunctional but light and easy to transport.

If IdZ-ES sounds like a complex proposition, it’s important to recognise that it was a long time in the making. The first-generation system was seen by many troops as a hindrance rather than helpful, meaning that when it came to developing Gladius, Rheinmetall had some well-defined problems to chew on.

Dr Karl-Heinz Rippert, IdZ programme manager at what was then the BWB (German Federal Office of Defense Technology and Procurement), discussed these developments at their earliest incarnation. He pointed out that the original IdZ system had suffered from a lack of planning and that it never worked well in service. IdZ-ES would not only be better planned and tested, but would also solve two key requirements: reducing weight from the infantry soldier and taking care of human factors.

“The basic idea was to go with a higher systems-integration level and enhanced functionality relative to IdZ. The goals were to have a reduction in weight, volume and power consumption; a connection to a battle management system; and the realisation of an ergonomic system, so that human factors stand in the foreground,” Rippert said.

Compared with its predecessor, IdZ-ES would be less integrated, and more modular. This would allow troops to take only what was necessary for that mission, reducing the overall weight. Its new computer would reduce weight and volume by 20%, while adding in a number of extra capabilities, and some less critical features (such as an SD card slot) would be dropped.

In short, the focus shifted to ergonomics even at the expense of technology. It paid off: multiple ensembles were deployed to Afghanistan. While the initial funding stopped in March 2014, it was subsequently allocated into the Bundeswehr’s long-term costs.

“The new IdZ-ES is an original, comprehensive, innovative solution,” Bodo Garbe, a member of Rheinmetall’s executive board, said. “For the first time ever, it proved possible to implement an entirely new design for a soldier system and get it to the troops. Thanks to Gladius... German infantrymen can now play an active role in network-enabled warfare. Fielding it is a major step in the process of improving the equipment of infantry forces in future deployed operations, thus enhancing the survivability of the individual soldier.”

Since then, the German Army has announced further improvements. In early 2016, Rheinmetall revealed it was anticipating a new contract for 2,100 Gladius systems with deliveries set to begin in early 2018. Its existing systems are expected to be upgraded to make them even more user-friendly.

squad-leader display incorporating the computer. This will decrease the overall weight from 10.8 to 7.7lb. Battery life will be increased by 30% so batteries will last a year with normal use. The original weapon-mounted Bluetooth PTT switch has been replaced by a newer proprietary system requiring less power.

These refinements came from feedback from the initial users in Afghanistan, who said the system had performed well overall.

Other European countries have also developed future soldier equipment programmes. France has FELIN, with a second version in development. Italy has Soldato Futuro, Poland has Tytan, Spain has ComFut and the UK has Future Integrated Soldier Technology (FIST).

These programmes are only loosely synchronised from one country to the next, spurring suggestions they should

In the meantime, whether or not Gladius is the most advanced soldier system of its kind depends on how one defines ‘advanced’. What does seem clear is that, as Germany prepares to expand its international commitments, the programme is likely to be indispensable.

As Rheinmetall explained ahead of Eurosatory 2016: “Experience gained and lessons learned in recent conflicts underscore once again the importance of having well-trained, well-equipped, highly flexible, highly mobile infantry forces that are capable of operating in joint and combined scenarios, and putting boots on the ground where they are needed most, ultimately achieving the desired military outcome.” 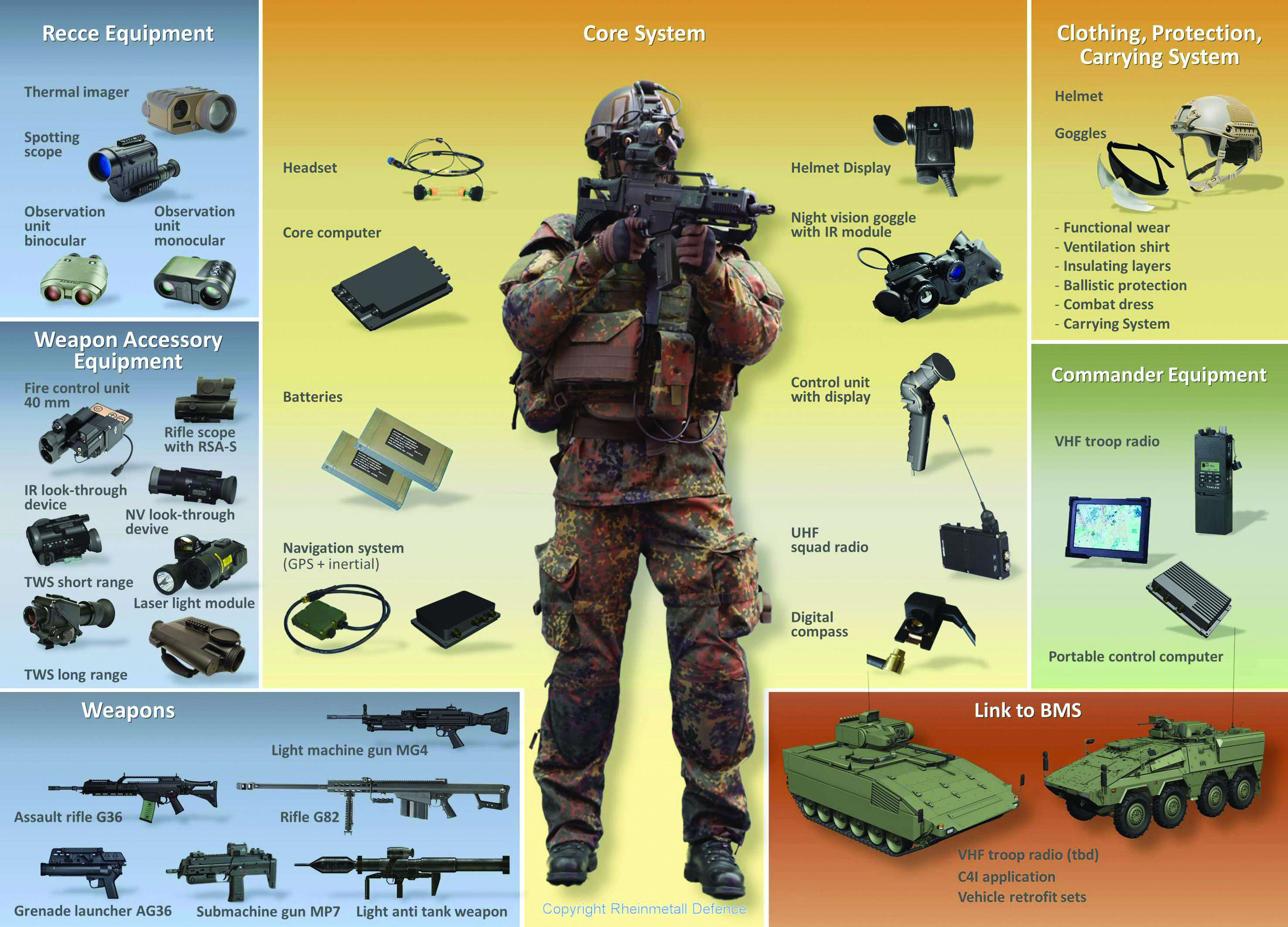 The German Military’s high-tech IdZ or future soldier equipment proved successful in Afghanistan and has since been improved in the new IdZ-ES system.
Post to: