Lighter, stronger, smarter: new innovations are starting to have an impact on soldier armour. Claire Apthorp takes a look at the latest trends.

The priority for body armour is to save the wearer’s life in the face of battlefield threats, from gunfire to blunt-force trauma in the event of an improvised explosive device detonation. But it’s not all about stopping bullets; there are many factors that affect how wearable armour is, which in turn impacts how and when it will be worn. If body armour is too heavy, bulky, restrictive or hot, it will diminish the wearer’s effectiveness in the field – a fact that quickly became apparent in Afghanistan.

The heavy weight of a soldier’s load became a serious issue during the Afghanistan campaign, where a programme driving concept of operations (CONOPS) and equipment rethink issues quickly became a priority. The ever-present threat of IEDs meant that soldiers needed to be protected by as much body armour as possible. However, the difficult terrain and harsh environmental conditions tested soldier endurance to the extreme, meaning that, while the onus remained on safety, new technologies were needed to minimise weight.

A big change came when the US Army’s standard issue outer tactical vest was replaced by the lighter improved outer tactical vest (IOTV) in 2007, addressing the balance between protection and weight with a move towards greater modularity. Compatible with the newer, lighter and more protective enhanced small arms protective inserts (ESAPI) and enhanced side ballistic inserts, the wearer is able to armour the IOTV up or down as required, and the entire system can be released with the pull of a lanyard to allow the wearer to drop the load during water hazard incidents.

The US military’s next iteration of body armour will focus on reducing weight even further while increasing scalability to allow the wearer to adjust his equipment, depending on the threat level and mission at hand. The new torso and extremity protection system (TEP) in development at Program Executive Office Soldier is part of the new soldier protection system. It includes a modular scalable vest, ballistic combat shirt, blast pelvic protection system and a battle belt, which is aimed at getting weight off a soldier’s shoulders and onto the hips.

At its peak, the TEP will provide protection levels on par with the IOTV; its minimum level of protection will consist of wearing soft armour garments under uniform. The ballistic combat shirt is made of a breathable fabric, which has smaller ballistic protection parts built in and is to be worn under the TEP’s modular scalable vest. Soldiers also benefit from the blast pelvic protection system that has been designed to protect their thighs and groin against ballistic threats and burns. This system will be rolled-out in 2018 or 2019 following the completion of ballistic testing.

Technology is moving on and military forces, like the US Army, are investigating new ways of keeping soldiers safe in the field.

Liquid armour is the leading big-ticket item in this area, with companies such as BAE Systems looking to apply the technology to emerging requirements. In June 2017, the company signed an agreement with safety and survivability technology company Helios Global Technologies to do just this. Liquid armour is a material that hardens very quickly when struck by a projectile at speed, in order to absorb the energy of the impact. It offers increased protection with reduced mass, wider area coverage, greater wearer manoeuvrability and can also be integrated with other systems, including being incorporated into standard Kevlar body armour.

According to BAE Systems, when combined with Kevlar, the reduced flow of the fluids in liquid armour restricts the motion of the fabric yarns, thus dispersing the energy of an impact over a larger area. The material is, therefore, less likely to distort than standard body armour, which generally bends inwards when a bullet strikes, preventing death, but causing considerable pain. Indeed, studies show that, when combined, these two materials offer ‘superior freedom of motion and a reduction in overall thickness of up to 45%’.

Liquid body armour is also under development at MORATEX. The Polish company is working with the Military Institute of Armament Technology to apply the behaviour of a non-Newtonian fluid – which does not follow Newton’s viscosity law, instead opting for one where viscosity increases with the rate of shear strain – known as shear thickening fluid (STF) to body armour. When integrated into body armour as a protective insert, STF hardens upon impact and disperses the force of a blast or blow over a wider area of the body to not only stopping a bullet or projectile from piercing the body, but also to significantly reduce the shockwave from the impact, which can be as devastating to the body and internal organs as a bullet.

In addition to being lighter than standard ballistic inserts, and allowing a broader, more natural range of movement, materials with STF are proving to be more comfortable to the wearer. The US Army Research Laboratory has put STF-treated ballistic fabrics to the test to measure their breathability by assessing whether a fabric will allow sweat to be absorbed and then released through the fabric itself, in order to keep the wearer’s body temperature stable and prevent overheating.

Liquid armour is a material that hardens very quickly when struck by a projectile at speed, in order to absorb the energy of the impact. It offers increased protection with reduced mass, wider area coverage, greater wearer manoeuvrability and can also be integrated with other systems.

Similarly, D3O has developed a number of armour products for defence from soft, flexible materials with high shock-absorbing properties. In their raw form, the company’s materials’ molecules flow freely, allowing them to be soft and flexible, but on impact, lock together to dissipate impact energy and reduce the transmitted force.

The company’s technology has been incorporated into a range of protective equipment, including vests for blunt trauma impact protection, seat pads for armoured personnel carriers and the TRUST helmet pad system. The latter is a seven-pad system – which uses a material called Decell – comes in the form of pads that are fitted to most ground combat helmets, including the advanced combat helmet, providing comfort and better deceleration under blunt impact. According to the company, its high performance exceeds the required level of protection by 33% in advanced combat helmet testing at 10ft a second.

Looking ahead, research is now beginning to move into even more futuristic arenas, from malleable fabric exosuits, lighter plastic materials to replace Kevlar and armour that can heal itself following a strike. 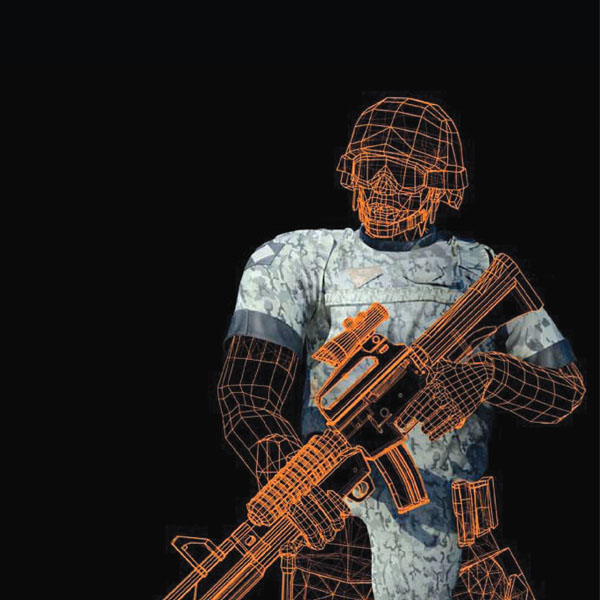 The STF Armour system from BAE. 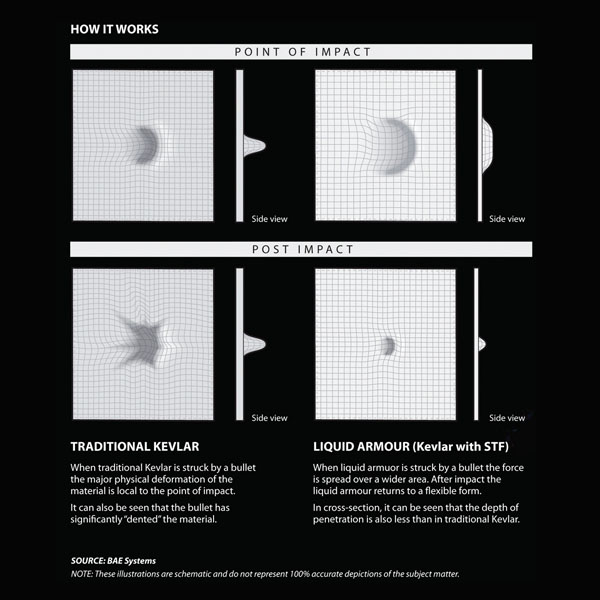 Military forces around the world are now looking towards technology such as liquid armour to keep personnel safe in combat zones.
Post to: