Recent events have served to highlight the difficulties of monitoring and protecting our borders, physically and digitally. It has to be done with care, using the appropriate methods in the right way. Accenture’s James Canham explains the challenges border officers and their surveillance counterparts face, and how the disciplines are being brought together.

In May 2017, US President Donald Trump spoke at his first NATO summit. Alongside calls for higher defence spending, he suggested that NATO ought to take a harder line on immigration.

“You have thousands and thousands of people pouring into our various countries, and spreading throughout, and, in many cases, we have no idea who they are. The NATO of the future must include a great focus on terrorism and immigration,” he stated.

While migration-related activities have never been NATO’s traditional domain, recent years have seen an uptick in work of this kind. In February 2016, NATO ships were deployed to the Aegean Sea, to conduct reconnaissance, monitoring and surveillance of illegal crossings. These efforts, in cooperation with the EU border management agency Frontex, were designed to help stem human trafficking and assist with the refugee crisis.

Later that year, in June and October, the organisation gathered with partners to discuss border security issues in Eastern Europe.

Michael Gaul, senior adviser at the Emerging Security Challenges Division, said: “NATO is certainly not primarily known as a border security organisation, but border security matters for nearly all the asymmetric security challenges, which cannot be addressed by purely military means. At the end of the day, NATO is also affected by political and security developments beyond its borders”.

Discussions of this kind seem timely given the challenges border agencies are facing. In Eastern Europe, for instance, border security strategies must contend with illegal weapons trafficking, smuggling activity and the rising threat of terrorism.

Within the US, President Trump’s stance on immigration is well known. His proposed travel order, which would temporarily ban citizens from six majority- Muslim countries, is supposedly intended to protect the US from terrorism. However, when he first tried implementing a ban of this kind, it led to chaos at airports around the world before being blocked by judges.

Speaking more generally, border agencies must also contend with rising numbers of passengers. For instance, the number of passengers using UK airports is expected to more than double by 2050, which means longer wait times in immigration queues, delays in supply chain processes on cargo shipments and greater pressure on the workforce to do more with less.

In these uncertain times, what can border agencies do to protect their home turf against threats? And how can they do this without compromising individuals’ basic rights and privacy – a question that becomes more salient than ever when you consider the way new technologies feed into the mix?

According to James Canham, managing director of border services at Accenture, today’s border agencies have a complex range of challenges on their hands.

“Border agencies are faced with increasing numbers of travellers and goods, and the complex nature of crossborder crime while hit by budgetary constraints,” he remarks. “Apart from these, there are also regulatory and political factors such as Brexit and entry/ exit in the EU, or the European Travel Information and Authorisation System (ETIAS), that magnify the impact on border agencies.”

“Travellers today expect seamless movement across borders, which can be achieved only through intelligent automation driven by digital technologies,” says Canham. “Digital has a core role to play for border agencies, from the point of view of security and facilitation.”

Many of the emerging digital technologies are geared towards verifying identities, pinpointing any travellers who might be a security threat. The most obvious example is eGates at airports, which identify passengers by electronically scanning their passports.

These might eventually be superseded by more sophisticated biometric systems, such as the facial recognition systems currently being phased into Australian airports or the new biometric selfboarding process being tested on the airline JetBlue. As Canham explains, innovations of this kind are creating new possibilities at the border.

As well as improving safety, these kinds of technologies are also likely to speed up the departures and arrivals process, which gives passengers a good reason to comply.

“Travellers need to be incentivised to provide their information upfront,” Canham adds. “These incentives have to be focused on faster and more secure facilitation at the point of border crossing. In a recent Accenture survey, more than 60% of the respondents indicated that they would be ‘very willing’ to provide their biometric data upfront if it meant reducing wait times to cross international borders.”

For instance, in a recent EU entry/exit management pilot, passengers were asked to provide their consent for biometric data collection. They were then directed to a special lane where their face, fingerprint and iris image were captured.

Naturally, data security becomes critical here as, in order for people to feel comfortable with such initiatives, they need to have confidence that their personal data is safe from hackers.

Aside from biometrics, border agencies are also starting to invest in technologies such as blockchain, data analytics, machine learning and internet of things (IoT). For instance, IoT combined with analytics will allow customs agencies to detect fraud and monitor cargo, while creating new approaches to passenger risk.

“From a border guard perspective, analytics is becoming more widely adopted to assess the risk of passengers and cargo coming into the country,” Canham explains. “Advanced predictive analytics engines are now able to capture details of incoming passengers and assess risk based on comparison with watch-list data, analysis of social media, and passenger name record (PNR) information, to name a few.”

Predictive modelling can also be useful for managing workload by allowing agencies to accurately estimate border resource requirements at any given point of the day. This will free up personnel to focus on the more strategic, intelligenceled aspects of border control.

Meanwhile, IoT data can be used to check whether cargo actually does move along the declared routes or to detect potential tampering. Artificial intelligence and robotics is starting to help with faster processing of immigration applications; video analytics can assess situations at points of border crossing; and holographic visualisations can be used to plan tactics in the event of a security threat.

As Canham sees it, these kinds of tasks are not a job for border agencies alone. They need to work together with surveillance agencies, sharing data with each other seamlessly and securely. For instance, the central Schengen Information System in the EU enables alerts to be shared across member states, while monitoring external border crossing throughout the region.

“Surveillance and border agencies share a common goal – to prevent the wrong people or goods from entering the country,” he says. “Today, border agencies receive passenger manifests from airlines, and this is then used to identify high-risk or wanted individuals. In carrying out this assessment, one of the key data sets used is intelligence data. Similarly, surveillance officers feed data to border guards in order to intercept persons of interest while crossing international borders.”

In future, he believes border security will be predicated on three key pillars – data, user-centricity and digital enablement. With regard to the first pillar, border agencies will need to make better use of databases to arrive at comprehensive risk assessments. User-centricity will have ramifications for customer service, affecting immigration and trade. Finally, digital enablement will involve increasingly sophisticated use of advanced technologies, along with a willingness to replace legacy systems and migrate the data they hold.

“Digital technologies will also enhance the way in which people interact with border agencies,” Canham remarks. “For example, in the US, mobile passport control has been introduced, through which a passenger can use a government-issued mobile app to fill in immigration details, thereby significantly reducing the time spent with a border guard.”

He expects to see an increased use of automated border clearance mechanisms, which will allow passengers and goods to be cleared before they arrive.

“This means that they can, in effect, be treated as domestic arrivals when they reach the destination country – assuming that a suitable environment exists at the port of entry to prevent people and goods that have been precleared from co-mingling with those that have not,” he says.

As border and surveillance agencies work hard to address these challenges, it is clear that this is not a job for any one organisation alone. With terrorism a constant talking point, border security is a far-reaching and sensitive issue that is unlikely to slip off the political radar. The fact that it is now on NATO’s agenda should come as little surprise. 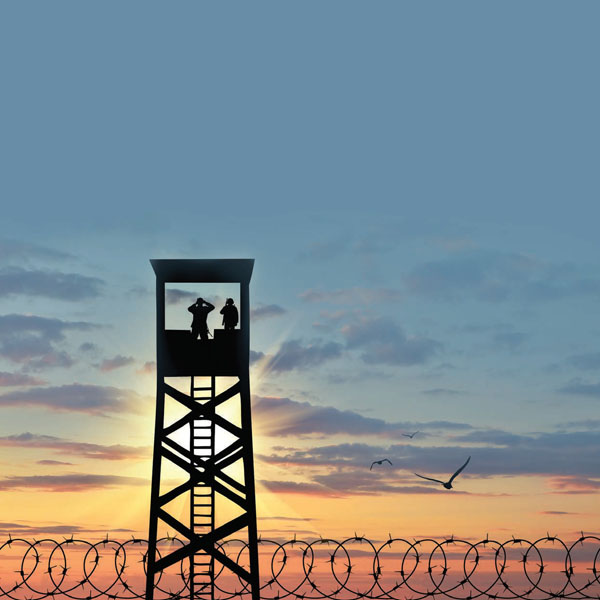 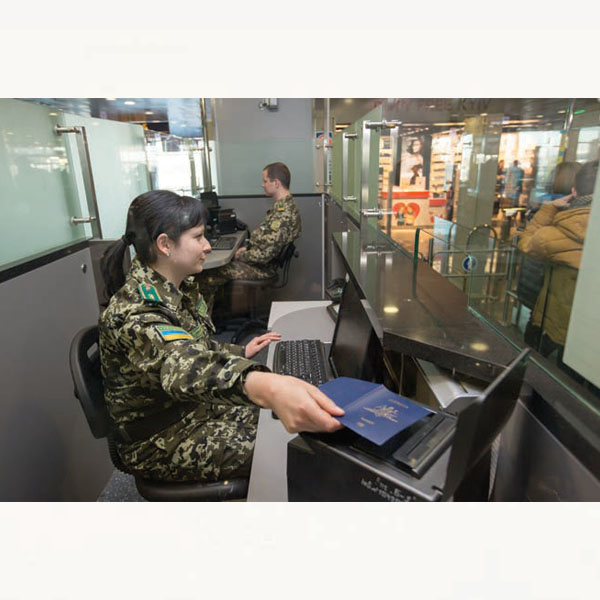 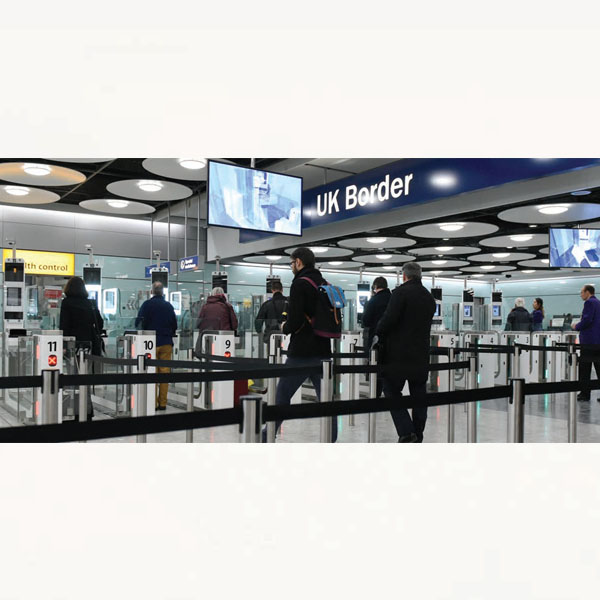 Border agencies need to collaborate with surveillance agencies to maximise security.
Post to: