Simware Solutions - From LVC simulation to the internet of simulations

LVC simulation is the future of military training, but there are many challenges it faces before it can be widely adopted. Simware Solutions offers a solution to these challenges, with the first and only simulation platform that brings the 'internet of simulations' to the military market.

Live, virtual, constructive (LVC) simulation, or net-centric simulation, is now one of the main requirements found on training military programmes. Military agencies are emphasising the use of LVC simulation for training and mission rehearsal to produce a more efficient and cost-effective training environment. LVC simulation is not a new technology, nor is it a new requirement for the military forces. Originating in the early 1980s, though, it is still a technology trying to break into the mainstream of military training solutions.

The origin of LVC simulation

LVC simulation, as it exists and is demanded by the industry today (based on high-fidelity simulations, immersive 3D graphics and connected simulators in a network) originated from DARPA's SIMNET program. SIMNET was born in 1978, when US Air Force (USAF) Captain Jack Thorpe thought of linking two flight simulators in order to allow a pilot and wingman to train together in a common virtual world.

At the time, the necessary technologies weren't available to make this a reality - the internet's predecessor, ARPANET, was only a small-scale experiment - so the concept was merely science-fiction. In the early 1980s, however, Thorpe was assigned to DARPA as a program manager, and was able to return to his idea. Thorpe transformed his idea into a program using the capabilities and new technologies for networking developed at ARPANET. This project was named SIMNET. SIMNET was the origin of many new technologies: not only networking simulators, but also impressive 3D virtual worlds. SIMNET has evolved into LVC simulation, and it is requested worldwide to maintain the operational readiness of the military and security forces.

Now, 30 years later, it is interesting to compare how both projects have evolved. ARPANET's offspring is the internet, offering an open global platform of communication between people and machines. The internet is now the main platform of business between companies and consumers (including B2B, B2C and C2C capabilities, and so on), and is fast evolving to connect machines with machines, too, in the new 'M2M' market of the internet of things (IoT).

Only one of the offsprings of SIMNET, 3D graphics, has reached mainstream audiences well - today, most consumers have more 3D power in their smartphones than SIMNET had in its tank simulators in the 1980s - while LVC simulation is still a niche market. Compared with the internet and 3D graphics technologies, LVC simulation has experienced a very different pace of evolution and adoption. It is still a difficult issue, requiring large budgets, and a lot of time and work to connect and interoperate simulators within a network. Even when this is achieved, the capabilities of this federation of simulations are also much fewer than the capabilities provided by stand-alone simulators - a curious paradox, as we are used to seeing an improvement in performance when devices are connected to a network in any internet application.

The importance of LVC simulation in mainstream military training

Net-centric operations and the increasing complexity of military systems demand sophisticated training environments that do not only use live assets. Many lead users are already requesting LVC simulation to maintain the operational readiness of military forces.

Col Marticello, USAF chief of the simulators division, for instance, said at I/ITSEC 2014 that "the simulator will bear more responsibility for training and retaining proficiency and readiness across the force in a realistic environment".

"There was a time when the simulator was used to provide basic proficiency/task kinds of training," he explained. "And now, with the recognition that you can't generate a rich, combat-realistic environment in the real world without that virtual component, USAF simulators are being asked to shoulder more proficiency and readiness training."

Other lead users go beyond this, looking for other uses of LVC simulation. In an article by Kevin Gray, 'The Last Fighter Pilot' (Popular Science, Jan/Feb 2016), Lt Col Rhett Hierlmeier, head of the F35 fighter jet simulation centre at Luke Air base, points out a possible evolution of this technology: using virtual simulators to 'fly' unmanned fighters from within the theatre of operations.

Hierlmeier envisions a radical and promising new way to deal with military operations: live systems deployed in operations that are managed via virtual simulators, located in a simulation centre. This would see the virtual and real worlds blended seamlessly in an augmented reality scenario.

These are two examples of how leading industry players are pushing for an improved integration of the simulations in the military's network-centric systems as an integral part of the whole system; useful not only to train, but also to rehearse and even perform the operations.

How to bring LVC into the mainstream

Many challenges must be solved before the industry can achieve a vision such as that discussed by Marticello or Hierlmeier. As things stand now, we are still some time away from this vision, but it is a possibility for the future if the industry alters the conception of the simulation systems. To realise this dream, training devices will need to evolve from the current proprietary and stovepipe simulators into open, interoperable and connected devices that can plug and play in a network with other live or virtual systems without any type of restriction. This evolution is vital for bringing LVC simulation into the mainstream and making sure it is affordable to military forces around the world.

The internet has transformed how we exchange and share information with others, and promises to transform the way consumer and industry devices are employed. In the same way, this paradigm, named by Simware the 'internet of simulations', or IoS, must unleash the real value of networked or distributed simulation.

The US Department of Defense's LVC architectural roadmap study (LVCAR) has already outlined these challenges well, identifying the next issues preventing the rapid adoption of LVC simulation:

Unleash the value of LVC simulation

Simware Solutions has addressed all of the challenges identified by LVCAR in its commercial off-the-shelf (COTS) product line: the Simware platform. Simware's mission is to unleash the real value of LVC simulation, introducing IoS into the market in order to evolve stovepipe simulators into open and modular devices, seamlessly connected in a network. In order to do this, Simware is based upon disruptive architecture: the layered simulation architecture (LSA).

Compared with other simulation architectures, LSA excels in features that are essential for LVC simulation: it uses pure, distributed and data-centric architecture, based on industry standards, and converges multiple standards and protocols in a common platform (such as HLA, DDS, DIS and web), allowing interoperability between any type of simulation or operational system. It can also be used as the real-time platform of the simulator itself, allowing the opening of the training device's architecture.

Simware is the first COTS platform that leverages LSA to enable IoS not only for new developments, but also for legacy simulators already operational. Simware enables IoS in many ways: 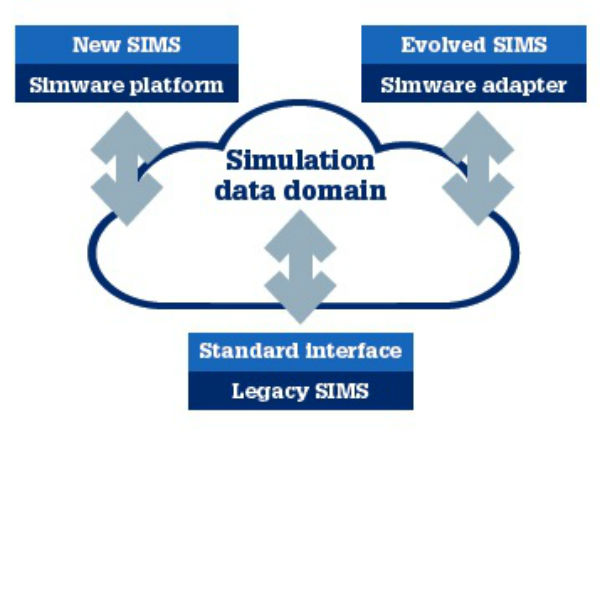 Only open platforms like Simware can bring LVC simulation to the mainstream. 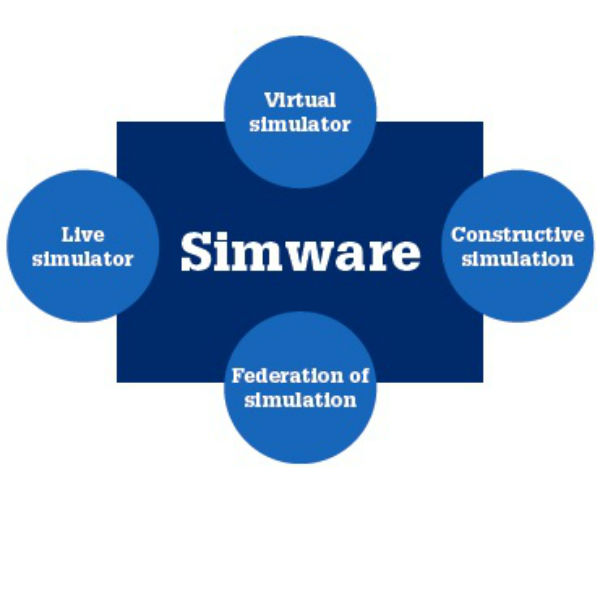 Simware: one platform for every simulation application.