Four decades of experience in developing and manufacturing coaxial - and data line - high-altitude electromagnetic pulse and lightning protectors are the foundation of HUBER+SUHNER's current portfolio and have made it a first stop for protection solutions in defence applications.

The threat mechanisms by which high-level energy surges are generated can be classified as natural occurrences or man-made energy surges. The natural phenomenon of lightning (LEMP) has been extensively investigated. Flashes with currents up to 400kA are generated as soon as the electrical field strength exceeds 100kV/m. Good lightning protectors will be capable of handling large currents without degradation. Unintentional man-made surges originate from high-power switching of electric engines, whereas intentional ones are created by specific weapons, radar equipment or high-power communication transmitters. There are three categories of intentional created surges: the high-altitude electromagnetic pulse (HEMP), the high-power microwave/ultra-wideband (HPM/UWB) pulse and radar pulse streams.

HEMP's interference mechanism derives from Gamma radiation generated during a nuclear explosion at high altitude. This radiation displaces electrons from the molecules in the upper atmosphere (the Compton effect), which causes the high-level HEMP/NEMP (nuclear EMP) pulse. Such a high-altitude nuclear explosion can affect an area several hundreds of kilometres in diameter.

HEMP/NEMP protectors can divert fast pulses (ns rise times) on a path with minimal inductance to the ground. The HEMP pulse has significant spectral components - up to ˜300MHz.

Several non-nuclear mechanisms have been developed that produce even faster effects than the HEMP. The technique of using fast-pulse generators that receive their energy either from conventional TNT explosions or from large capacitors (Marx generator) built into bombs (E bombs) or missiles is well known. The frequency content of UWB pulses ranges from 500MHz to 5GHz. HPM sources generate narrow-band signals extending from one to 10GHz. Protectors against HPM and UWB signals must be able to react within pico seconds.

Radar pulse streams and other transmitters with high continuous or pulsed power are a threat for any sensitive RF receivers on board vessels and planes. Classic examples are jets landing on an aircraft carrier, or signal exploitation hardware on warships - these demand protection components that limit the received signals to a non-hazardous level.

HUBER+SUHNER holds groundbreaking patents in the field of coaxial lightning and HEMP protection, such as the automatically suppressing surge arrestor. The patented SEMPER concept enhances the safety and reliability of the well-known gas discharge tube (GDT) protector principle. It eliminates the risk of gas discharge tube "hold on" due to DC line powering or high RF signals, which render the system inoperable and can destroy the GDT. The SEMPER invention is based on a mechanical resettable thermo-switch, which is integrated within the GDT protector capsule holder.

HUBER+SUHNER offers protection components for land-based, airborne and naval tactical communications, as well as for navigation, radar and electronic warfare applications. Many of them are referenced by the NATO Maintenance and Supply Agency (NAMSA) as follows: 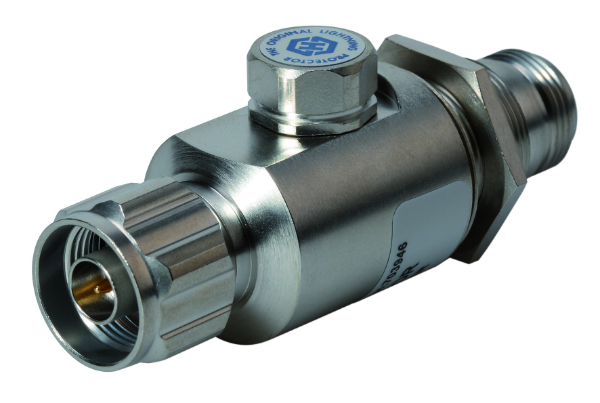 HUBER+SUHNER’s HEMP/NEMP protectors can divert fast pulses on a path with minimal inductance to the ground.

The spectral density of high-level energy surges, either natural or man-made: each one is generated by threat mechanisms.