PFISTERER - More power to you

Please could you tell us why it is important that armed forces tap into the power of renewable sources?
Martin Schuster: Armed forces depend on fossil fuel. Since the Second World War, the average consumption per soldier has increased dramatically. Meanwhile, the logistical demands to access fuel supply are significant and dominate the bulk of all logistical decisions.
If this can be reduced by using renewable energy, it will help armed forces maximise the use of resources. In addition to this, there is less need to transport fuel, which can be a very dangerous activity. This protects the lives of the soldiers.

What is CrossPower, and how does it work?
CrossPower is a hybrid power generating system that uses different energy sources, but mainly renewables through wind turbines and solar panels. Diesel gensets act as a back-up when the power generated by renewable sources runs dry, or conditions are not suitable for generating power.
The management system is important, as it affords the opportunity to prioritise different sources for different consumers, or for varied needs. This enables certain sections of a military camp, such as the soldiers' barracks, to go without power in order to maximise energy at operational stations. Additionally, it controls the charging and discharging of back-up batteries.

What are some specific situations where the CrossPower system has been used by military personnel?
The first intensive test with military personnel was performed during the NATO exercise CL 15, in the summer of 2015, in Hungary. Conditions were very hot and dusty. For ten days, the system supplied part of the multinational camp. Since the beginning of this year, another system has been used for the NATO ENSEC COE in Lithuania. This system is permanently used for different exercises and is deployed frequently.

In what ways can military personnel customise their energy requirements with the CrossPower system?
This is very important: if we have a 150kW system, but a camp only demands a maximum of 100kW, then the average 40kW load that a standard 150kW diesel genset will run is ineffective. This leads to high fuel consumption and increased maintenance.
With CrossPower, the fuel genset will run only a few hours when needed and always in the most effective range. CrossPower automatically customises the users' needs by knowing which energy source to use in the moment.

How does the system deal with power surges and in what ways will operations be affected by these unpredictable happenings?
CrossPower always uses a battery with, for example, 100kWh capacity that can generate 150kW of power. In combination with the fast inverters, the system deals well with power surges through internal regulation. One of the biggest advantages of the system, therefore, is uninterrupted supply with high-quality power.

It sounds like the system requires multiple parts to function. How easy is it to transport to remote locations?
A main requirement in the spec was to be easily deployable. For example, the complete 150kW system is transported in two 20ft containers. The well-known philosophy of PFISTERER is 'plug and operate', which shows its commitment to really simple, safe and quick to installation on site. Energy supply starts within a few minutes and complete installation takes about four to six hours.

Users of the CrossPower system see a return on investment within three years. How is it possible to reap these rewards in such a short space of time?
Let's look at a simple example of a camp with a 250kW fuel genset. The genset has a consumption of 700L of diesel a day. The system is used 200 days in the first year, so we have a total consumption of 140,000L.
By using CrossPower with renewables, we have a fuel saving of about 50%. If we calculate a litre price inclusive of logistics of €3, we have a saving of €210,000 a year.

What do you consider the guiding principles behind the development of PFISTERER products?
PFISTERER products are designed to allow simple, quick and safe installation, as I mentioned before, but should also offer maintenance-free operation.
PFISTERER has always been, and will continue to be, highly regarded for using state-of-the art technology that is easy to use and long-lasting. PFISTERER is often a trendsetter in the industry. Being as environmentally friendly as possible is another important motivating factor for the company.

What can we expect to see from PFISTERER in the future?
PFISTERER is constantly inventing new products that deal with the transmission and distribution of energy, but is also increasing its efforts to finalise its range of hybrid power generating systems in the 25kW-5MW range. Products up to 250kW are mainly mobile systems, but for products between 500kW and 5MW, PFISTERER provides stationary equipment. Additionally, it ensures that all of its systems can be connected to different primary energy sources. 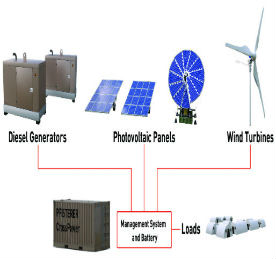 CrossPower draws on a variety of energy sources to guarantee that power is available wherever it is most needed.

CrossPower uses renewables to achieve fuel savings of up to 50%, which translates into many thousands of litres of diesel every year.