MetaSensing's expertise in high-resolution radar systems is a crucial added value to security and surveillance services. The company's founder and director, Dr Adriano Meta, gives an overview of its radar sensor systems, which are designed for surveillance and patrolling.

What is MetaSensing's background?
Dr Adriano Meta: Founded in the Netherlands in 2008 within the European Space Research and Technology Centre (ESTEC) of the European Space Agency (ESA) business-incubation programme, MetaSensing develops advanced radar systems that provide complete solutions for a large variety of applications in Earth observation, as well as in the security and defence sector.
MetaSensing's radar sensors are end-to-end systems, delivered with control and visualisation software, and with all required data processing tools.
Over the years, MetaSensing has developed advanced airborne synthetic aperture radar (SAR) and ground-based radar systems, along with dedicated processing software, which have been delivered to customers worldwide.

What can MetaSensing offer to the defence and security market?
MetaSensing provides innovative solutions to meet the demanding challenges of the defence and security market. In terms of airborne sensors, the company has developed MiniSAR, a lightweight, high-resolution (30cm) X-band radar system to be installed on UAV platforms, meant for surveillance and patrolling tasks. It can provide SAR, Inverse SAR, and MTI processing in real-time and high-resolution.
For the more demanding applications like border surveillance, MetaSensing has the airborne MetaSAR-XP and MetaSAR-XL, which use simultaneous low- and high-frequency to provide high-resolution (sub-meter) imaging of both concealed targets under vegetation (FOPEN) at P or L-band and of smaller structures at X-band. Both systems have two transmitters and two simultaneous receivers capable of operating in fully polarimetric and interferometric modes for improved target classification. Moreover, both systems can be customised with multiple receiving channels for detection of slow-moving targets and dismount moving targets.

What about ground-based systems?
MetaSensing has ground-based surveillance systems as well, including the vehicle-borne anti-UAV radar and the coastal surveillance radar sensor network. The anti-UAV radar is installed on a vehicle, usually a surveillance van, to detect and track small (drone, UAV, copters) and large objects (aircraft, helicopters, ships, cars) in real-time. The maximum detection distance for the current commercial UAV is 3km, and it increases up to tens of kilometres for larger targets. The coastal surveillance radar sensor network is a fixed installation of several low-probability of intercept (LPI) radar nodes, coherently synchronised, that can operate in monostatic alternated, bistatic, or multistatic configuration. The multistatic configuration increases the probability of detection of small targets and stealth targets, while the frequency modulated continuous wave (FMCW) technology suppresses the minimum operational range.
MetaSensing offers three possible configurations with this system: surveillance radar with detection and tracking capability, ISAR imaging radar with fully polarimetric capability for classification purposes, and ISAR Imaging radar with interferometric capability for estimation of the target volume.

What is MetaSensing currently developing?
MetaSensing is always improving its portfolio by offering the market new, advanced radar systems to fulfil and anticipate the needs of its customers.
Currently, the company is developing an advanced dual-frequency (X-P band) airborne surveillance and patrolling radar, improving on previous systems by offering simultaneous real-time SAR, FOPEN, and MTI (DMTI, GMTI, and GMTT) up to 160km. This system offers the most advanced performance and is lightweight and has low power consumption. 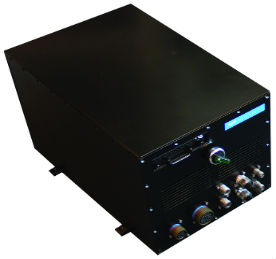