Armour can be made out of many materials. In the 19th century, iron cladding was a mainstay on most warships of the period, until the development of heavier naval guns and torpedoes rendered them obsolete. Since then, the field has widened. Plastic, ceramics, titanium, depleted uranium and even glass have been deployed in a variety of armoured applications. Steel, however, has remained one of the most reliable materials. Enhancements in rolling and forging the metal during the production of armour plates have led to vast improvements in the ability of steel plates to withstand the kinds of sudden and devastating stresses only seen in the field of combat.

As such, steel armour plating may be seen in a great variety of defence and civilian applications. At a plant just outside of Ittre in Belgium, engineers at NLMK Clabecq are working hard to push the boundaries of steel armour even further with its trademarked Quardian steel plates. The plates have become de rigueur for companies in the defence industry and others who don't wish to compromise on the weight of their armour plating with the amount of protection it can provide in a wide variety of combat scenarios. "We can offer it in different levels of hardness," says Antoine Héger, the company's business manager for quenched and tempered armouring plates, at its facility in Ittre, Belgium. "We go from 300 to 600 Brinell. In thickness range, we can go between 3.6 and 40.0mm globally."

One of the biggest uses of it has been in armoured personnel carriers, as well as other vehicles such as 4×4s for NGOs and other organisations, civil cars, coasters and cash-in-transit vehicles.

Originally founded in 1792, the plant specialises in the production of medium to heavy steel plates, with a total annual production capacity of over 750,000t a year. Today, the firm is a world leader in the production of steel. In recent years, the firm has used quenching and tempering technology to produce steel armour plating in Quardian that can be easily tailored to a plethora of defence applications.

"One of the biggest uses of it has been in armoured personnel carriers, as well as other vehicles such as 4×4s for NGOs and other organisations, civil cars, coasters and cash-in-transit vehicles," explains Héger. Quardian can also be found on shooting ranges, the sides of warships and other military vessels, in addition to sentry posts. Across all of these applications, NLMK is careful to balance the hardness and durability of the steel plate with the weight best suited to the task at hand.

NLMK manages to achieve this fine balance thanks to a unique blend of quenching, rolling and tempering the steel in various treatments at its facility in Clabecq. "We are the only plate manufacturers to use a four-stand finishing mill in addition to a quarto to roll our plates," explains Héger. "This one-pass final rolling guarantees tight thickness tolerances and improved surface aspect, among other advantages for our customers."

As Quardian plates are made in a single rolling, each product has homogenous mechanical properties, making it easier to process and bend the metal for specific applications. It makes for a unique product.

Furthermore, as Quardian plates are made in a single rolling, each product has homogenous mechanical properties, making it easier to process and bend the metal for specific applications. It makes for a unique product, the quality of which NLMK's competitors in the marketplace are struggling to keep pace with. "We can offer 3.6mm in thickness by 2.5m of width, which our competitors cannot do," says Héger. "Usually, they're offering smaller dimensions, with widths in the range of 1.5m.

That's less useful when you're working with applications for transit vehicles, for example, where it makes sense to work with much wider plates because it means less welding. Moreover, in the rest of the market, not everybody is able to offer 600 Brinell of hardness."

The quality of Quardian plates is not just evident when deployed in the field. Tested in several independent laboratories across Europe, the plate has won not only EN1522 certification but is also in keeping with VPAM, STANAG 4569 and other standards.

This adherence to quality is matched by a commitment to flexible and attentive customer service. "We have very good relationships with our big customers [in the defence industry] and we are appreciated because we show a lot of flexibility with them," explains Héger. "We will always try to accompany the customer and be as flexible as possible with them in order to supply them with strong technical support."

Not only are staff from Clabecq present when the plates are processed for the first time, but they also endeavour to keep clients abreast of the latest developments in the production process, in addition to product testing periods conducted with external laboratories. "We communicate a lot with our customers," Héger adds. "We're always trying to really work together with them rather than, say, imposing our technical solutions or ideal dimensions for the plates. We've always aimed to be more of a partner to our customers than just a supplier." 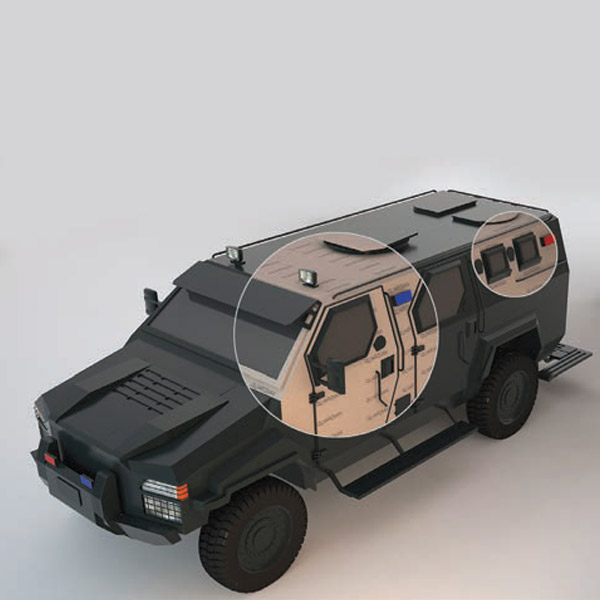 Quardian is suited to a wide range of armoured vehicles.