Take aim at the future 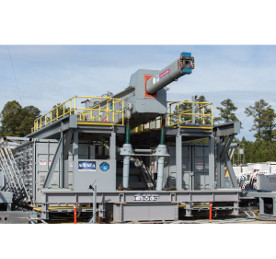 Futuristic laser weapons that can blast drones out of the sky and the high-speed world of motorsport don’t sound like two areas that would usually share common technologies.

“We saw an attractive option to bolster defence capability through the provision of more robust and futureproof power systems for naval ships.”
Andrew Tate, DSTL

But as it turns out, there are actually areas where the two meet, specifically when it comes to energy creation and storage.

The highly complex and innovative world of Formula 1 engineering has pioneered the use of stored energy to accelerate to ever-faster speeds without increasing the amount of harmful emissions to the environment. In March 2009, F1 introduced the kinetic energy recovery system (KERS), which allowed a power boost of 80bhp for 6.6 seconds using energy generated under braking that was then stored in a motor generator unit or electric flywheel.

It was not a smooth ride for the introduction of KERS, as initial systems were heavy and complex, and there were also safety fears when one team mechanic was hospitalised following an electric shock in July 2009. In its first year, many leading teams chose not to use KERS at all. That has changed, especially since vehicle weight limits have increased – F1 cars are now over 100kg heavier than a decade ago – and teams have rapidly innovated to take full advantage of stored energy.

KERS has also made its way to the historic Le Mans 24-hour race, with an Audi R18 car fitted with Williams Hybrid Power technology winning the top prototype position in 2012. It’s this innovation – pioneered by the likes of Williams Hybrid Power and its flywheel technology – that has piqued the interest of the defence industry, especially with regard to new equipment that will require intensive energy loads, such as directed energy weapons.

July 2009
F1 mechanic hospitalised after receiving an electric shock from a KERS set-up.

Hats off to FESS

The UK’s DSTL is working closely with British aerospace and automotive component specialists GKN to explore this technology. The company has significant experience in the area, especially since it acquired Williams Hybrid Power as part of a £8 million deal in 2014. DSTL and GKN unveiled the flywheel energy storage system (FESS) in 2019, which uses high-speed and lightweight flywheels to provide high-power electric pulses.

“This technology was originally developed by the Williams F1 team and was brought to us for potential use in defence,” noted Andrew Tate, the senior principal marine systems engineer at DSTL. “We saw an attractive option to bolster defence capability through the provision of more robust and futureproof power systems for naval ships.”

As well as working closely with UK industry, DSTL has partnered with research organisations within the US Navy to test the FESS for naval applications. This bilateral testing has been “fundamental to the success of the project”, according to the UK MoD, and carried out under what is known as the Advanced Electric Power and Propulsion Project Arrangement (AEP3).

“We saw an attractive option to bolster defence capability through the provision of more robust and futureproof power systems for naval ships.”
Andrew Tate, DSTL

This arrangement includes the Office of Naval Research and Naval Sea Systems Command’s (NAVSEA) Electric Ship Office (PMS 320), with US testing also supported by the US Coalition Warfare Program. Earlier this year, NAVSEA released its latest Naval Power & Energy Systems Technology Roadmap led by the Electric Ship Office, which stated that the US Navy was “on the cusp of revolutionary changes” that will take the form of “high-power pulsed mission systems”.

“These include directed energy weapons such as lasers and stochastic electronic warfare systems, radiated energy systems such as the air and missile defence radar, and advances in kinetic energy weapons, including electro-magnetic railguns,” said Stephen Markle, the director and programme manager of PMS 320.

“Legacy power systems found on all existing ships do not possess the inherent electrical ‘inertia’ to withstand the ramp-up/down (on/off), or ripple (pulsation) effects of complex power profiles of these advanced mission systems.”
Stephen Markle, PMS 320

“Legacy power systems found on all existing ships do not possess the inherent electrical ‘inertia’ to withstand the ramp-up/ down (on/off), or ripple (pulsation) effects of complex power profiles of these advanced mission systems,” he added.

For the UK-US testing of FESS, the teams involved have used an approach known as power hardware in-the-loop, which sees the integration of a real FESS system into a virtual ship power architecture that emulates a Royal Navy operating in real time. This was initially carried out at Florida State University, and was then brought to the Power Networks Demonstration Centre, Scotland, to advance the UK’s PHIL capabilities.

“This project gave us a great opportunity to showcase the PHIL test-bed that we’ve developed at PNDC,” said Kyle Jennett, the PNDC MOD programme technical lead, in a UK MoD statement. “This test bed lets us connect real-world hardware, like the FESS, to simulated naval platforms to evaluate the impact on the ship during different operational scenarios.”

In the future, this technology could ease the integration of next-generation weaponry onto naval vessels, including the UK Dragonfire, which is being developed by DSTL and UK industry as part of the laser directed energy weapon capability demonstrator programme. It is hoped that in the future UK Dragonfire will drastically reduce the cost of engagements, as well as providing crews with a range of options for defeating incoming vessels, drones and indirect-fire attacks. In the US, there is also a flurry of activity on directed energy weapons, as well as electromagnetic railguns that can propel solid projectiles at hypersonic velocities.

Evolution and revolution in energy generation

Through its service life, a ship will face numerous seen and unforeseen changes and innovations in warfighting technology. To maximise its effectiveness, it needs to be adaptable. That’s the insight behind the US Navy’s lastest Technology Development Roadmap, which lays out a strategy for developing future naval power and energy systems with modularity and flexibility in mind. In contrast to the traditional model of ship development -- which the document cites for its ability to produce very effective, if inflexible, naval platforms -- the ships themselves are to be decoupled from their payloads, using open standard interfaces to allow for more cost-effective maintenance and modernisation.

“The goal of revolutionising naval warfare is ambitious and should not be understated,” writes Vice-Admiral Thomas J Moore, head of the US Naval Sea System Command, in the 2019 roadmap’s foreword.”The envisioned change demands intelligent synchronised development.”

That’s not possible without full integration of the generation and storage of electrical energy into each ship’s entire platform, ensuring it’s available to all users. Without breaking out of the current paradigm of stovepiped, system-specific energy supplies, each modular improvement to a new ship platform would have to include its own energy architecture, which the roadmap cautions would negatively impact ship arrangements while driving up costs and limiting effectiveness.

On a wider scale, the stovepiped norm also fails to take advantage of what the roadmap highlights as one of electrification’s prime benefits: electricity’s fungibility in moving large amounts of energy from one place to another controllably and quickly. That’s particularly important, as current and future naval systems exhibit properties like high amplitude, high ramp rate pulses, and stochastic behaviour. By linking all of a vessel’s energy consumers and energy sources in a single electrical network, the Navy is laying the groundwork for a complete Tactical Energy Management (TEM) solution for optimising its assets’ capabilities.

It will take extensive research, development, and creative problem solving to identify, address and control the complexity of integrated systems, but fleets that achieve full TEM should be able to maintain their combat relevance by rapidly and affordably outfitting ships with new technologies as they become available.