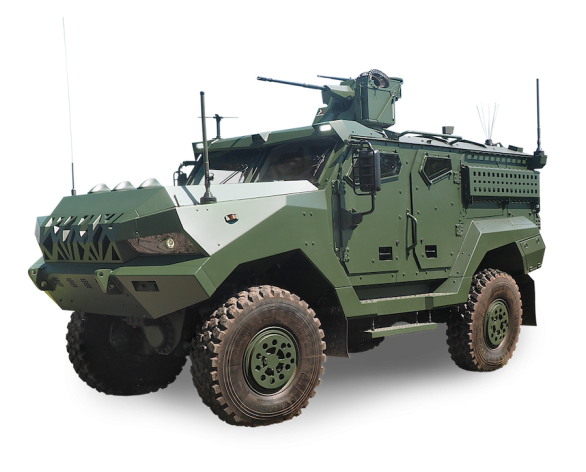 HSW S.A. (belonging to the PGZ S.A.) and the Czech Tatra Export s.r.o. company have signed a memorandum of understanding, on designing and delivering a 4x4 vehicle, along with complete technical documentation that would allow for establishing manufacturing capacity in Poland.

The memorandum signed is to make it possible to offer a light armoured 4x4 vehicle, within the framework of programmes involving the PGZ Group’s businesses. The new platform is going to be offered in the artillery/missile component upgrade programmes for instance.

The 4x4 vehicle would be useful to create a battery/platoon-level command platform, for the existing Langusta launcher squadrons - at the moment these elements use the legacy Soviet WD-43 command vehicles, although Topaz C2 solution has been integrated on the launchers. The new vehicles could also become a part of the currently designed DMO Kryl wheeled self-propelled howitzer elements (Squadron-level Fire Modules). The lack of a 4x4 platform was the main reason why the Langusta squadrons had not received a command system before. This was mentioned to Defence24.pl by Brig. general. ret. Jaroslaw Wierzcholski, former Head of the Artillery and Missile component of the Polish military WP, working as a director for artillery programmes between 2010 and 2013.

Memorandum has also been commented by the President of the Management Board at HSW, Bartlomiej Zajac: It remains our specialty to manufacture artillery systems. We have developed a strategy in this segment, of offering complete fire modules to the Ordering Party, that we create collaborating with the PGZ Group companies and with the privately owned businesses, such as the WB Group. Obtaining a right to manufacture a 4x4 vehicle in Poland greatly expands our ability to deliver solutions tailored to the requirements that the Polish Armed Forces express in the artillery programmes and beyond.

The HSW’s President stressed the fact that the development of the vehicle would be a joint effort with major involvement of the Polish industry. Also, the cooperation with the Czech company would become much easier thanks to a short physical distance between the partners’ HQs - and this plays a relevant role in the current circumstances of the coronavirus pandemic, he emphasized. Zajac also hoped that the vehicle will be rolled out in Kielce next year. An identical declaration has been made by Wojciech Grzonka, President at Tatra Export (a part of the Czechoslovak Group). He emphasized the fact that the newly designed platform is also intended to be sold in the third markets.

The 4x4 vehicle that is a subject of the memorandum is to be offered to all of the branches of the military, also in specialist varieties. The modern design is to provide the user with good handling, low cost of operation, and high levels of comfort.

HSW (acting as the leader of the consortium), together with Tatra Export s.r.o. are both involved in the Pegaz procurement programme aimed at the acquisition of multi-purpose vehicles for the Polish special operations component. The acquisition project mentioned above is being organized by the Armament Inspectorate of the Polish MoD. The unofficial information that Defence24.pl obtained suggests that HSW and Tatra consortium is one of the four bidders that have passed the qualification to the next stage of this procurement procedure. The remaining ones include AMZ Kutno, HCP/Arquus, and Thales Polska. However, the list is not exhaustive as of yet - the deadline for submission of potential protests at the National Chamber of Appeals has not yet expired. Despite the above, the memorandum of understanding signed is somewhat coherent with the actions made by HSW and Tatra to strengthen their joint 4x4 offer.