2019 has seen heatwaves occur across the globe, and a new report forecasts that servicemen and women in the US will have to become even more accustomed to working in extreme heat in the future. Grace Allen discusses the report, its implications and measures that the military is taking to combat temperature rises with Shana Udvardy, climate resilience analyst at the Union of Concerned Scientists (UCS).

The US military has experienced a 60% rise in cases of heatstroke or heat exhaustion in the decade since 2008. In 2018, this encompassed 578 cases of heatstroke and 2,214 of heat exhaustion. Beyond the obvious human cost, the financial toll of heat illnesses is estimated to have reached nearly $1 billion over 10 years. It’s an issue that the military has to reckon with, and all markers indicate that global temperatures will continue to rise.

The amount of time that troops will have to spend in dangerously high heat in the future is the subject of a new report entitled ‘Military Bases at Risk from Extreme Heat’. But contrary to what many people might expect, the servicemen and women pinpointed as being at risk here are not those stationed overseas.

“We know that many people may assume that the threat is for troops that are based or deployed abroad and places such as Afghanistan,” says Shana Udvardy, one of the authors of the report. “But with this work, we found that it’s really going to hit the folks at home at the US bases here in the United States – more so than the troops abroad.”

Only 67 of the 2,792 total incidents of heat-related illness in 2018 occurred to troops in Iraq and Afghanistan. Hot conditions on US bases have already resulted in tragedy: between 2008 and 2018, at least 17 troops have died during training exercises as a result of extreme heat.

The report projects the average number of dangerously hot days – defined as those reaching over 100°F by the Occupational Safety and Health Administration – which will be experienced by the US’s military bases over the next century. The predicted numbers for the middle of and late century vary according to whether action is taken on climate change, and if so, how quickly.

The results are shocking. “We suspected that climate change would increase the exposure of US troops to extreme heat,” Udvardy says. “But what surprised us was how staggering that increase is projected to be in the next three decades – so 20–40 years, particularly for some of the largest, most populous spaces.”

The analysis is part of a larger study, ‘Killer Heat in the United States: The Future of Dangerously Hot Days’. The purpose of this broader report is to provide “a detailed view of how extreme heat events caused by dangerous combinations of temperature and humidity are likely to become more frequent and widespread in the United States over this century”.

2,792
Total incidents of heat-related illness in 2018.
US Military Health System

“We really wanted to focus on what day-to-day people might see in the future and we wanted to really understand what the health risks are regarding heat,” Udvardy says. “So we started expanding our technical science on extreme heat, and we’re really thrilled to pull together our climate scientists to help think about what would be most useful as far as providing new analysis on extreme heat.”

The report was conducted by analysts and academics at the UCS. The organisation is a non-profit founded by staff and students from the Massachusetts Institute of Technology in 1969. Its founders included the late physicist Dr Henry Kendall, a Nobel laureate, and the board of directors is currently chaired by Anne Kapuscinski, professor of Environmental Studies at the University of California, Santa Cruz.

“We put science into action to build a healthier planet and a safer world,” Udvardy explains. “We conduct rigorous technical analysis, and we use this to advocate for change. And this is to help inform decision-makers and to create policies to help solve some of today’s most pressing problems.” The focus on military bases forms a case study that brings the consequences of temperature rise into stark relief. “We built an extra layer and focused on the military,” Udvardy says.

117
Days above 100°F each year by midcentury at Air Station Yuma if no action is taken on climate change.
UCS

The results have significant implications. “We found that several bases are projected to experience an equivalent of four months per year of potentially lethally hot days,” Udvardy says. “So these bases include – and this is by mid-century – Marine Corps Air Station Yuma in Arizona, MacDill Air Force Base in Florida and Homestead Air Reserve Base in Florida.”

Historically, Marine Corps Air Station Yuma has experienced an average of 76 days a year with a heat index above 100°F. With no action made on climate change, this is projected to rise to 117 days by the middle of the century and a huge 132 days by the end of the century. Slow action on climate change would see the number of dangerously hot days at Air Station Yuma reach 116 annually by the end of the century, while rapid action puts the average at 109, still over a month more than the historical average.

“We found that the number of lethally hot days at basic training facilities will on average quadruple by mid-century. Asian and Pacific Islanders and non-Hispanic black service members are also more at risk.”
Shana Udvardy

Effects on the ground

Some of the most populous bases are potentially set to endure long periods of extreme heat. Fort Bragg in Texas is home to around 50,000 troops. No action on climate change would see 89 days per year with a heat index above 100°F, 77 more than the historical average.

New recruits will feel the rise in temperatures. “We found that the number of lethally hot days at basic training facilities will on average quadruple by mid-century,” Udvardy says. Research has shown that young recruits suffer the effects of heat disproportionally, and particular ethnic demographics are also more vulnerable. “Asian and Pacific Islanders and non-Hispanic black service members are also more at risk,” Udvardy says.

Udvardy hopes that the report will inform future action. “We do believe that this analysis can highlight, for the military and the leadership within the [US] Department of Defense (DoD), on the need to review and update their guidelines, and standards and operating procedures to think about how better to prevent heat illness,” she says.

Nevertheless, she points out that the military does already take heat seriously: they are already tracking the number of heat illnesses experienced. “The military has long been realistic about the threat of climate change,” she says, noting that former secretary of defence James Mattis testified in front of Congress on climate change as a driver of instability. Already, new recruits are screened before basic training. Furthermore, “the air force, army, marine corps and navy all have rigorous heat-protection standards in place,” Udvardy adds.

A new and positive development that Udvardy highlights is the establishment of a ‘heat centre’ at Fort Benning, Georgia – one of the bases, according to Udvardy, that has seen the most heat illnesses. Based at Martin Army Community Hospital, the centre is focused on excellence in treating heatrelated illnesses, and holds annual heat forums aimed at developing best practices and reviewing guidelines. “Mastering mitigation and management strategies for HRI and becoming a sustainable resource for best practices throughout the DoD will improve readiness and save warfighters. This will pay dividends in establishing and maintaining military superiority in inhospitably hot environments,” wrote Major Meghan Galer, former director of the centre, in April 2019.

Equipment can be upgraded, too. The design of a new hot-weather uniform for the army was completed in the summer of 2019, with a higher proportion of nylon to cotton in the fabric blend to facilitate quicker drying and better breathability. “The improved hot-weather combat uniform gives warfighters an option in terms of having a uniform that is designed to allow soldiers to conduct their mission in an extremely hot or wet environment,” commented Colonel Stephen Thomas, project manager of soldier protection and individual equipment, on the uniform’s release.

More can be done, though. “In addition to reviewing their guidelines and standard operating procedures, they can think more about ways to adjust times of day or year when it’s safe for the soldiers to train outdoors. And just a better implementation and awareness of the dangers of heat-related illnesses can help, especially for new and young recruits, and understanding the signs and symptoms,” Udvardy says. “I think the military already understands this, but keeping an eye on it in the future will be very important.”

Overall, however, the solution will take more than even the might of the US military to achieve. Udvardy says we must dramatically and rapidly reduce carbon emissions. “The best thing we can do to keep our troops and, by extension, the country safe from these worsening conditions is to enact policies that encourage a rapid transition a clean-energy economy.” 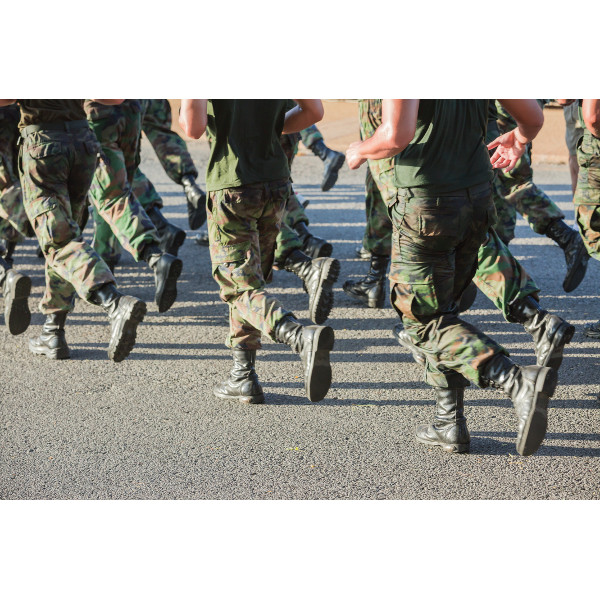 Young recruits are particularly vulnerable to heat illness.
Post to: