Innovative technologies and methodologies are being employed in the development of mortar systems with high accuracy and improved ease of operation. Andy Tunnicliffe discusses advances in this area, as well as the advantages presented by proven solutions, with Major Michael Johnsson, a mortar specialist in the Danish Artillery Regiment.

It was the British Army who first used the type of mortar system we are familiar with today. The 81mm man-portable trench mortar, known as the Stokes 3.2”, was deployed in-theatre in 1916 during the First World War. Since then, systems have changed very little in their look and theory.

However, the norms of battle are shifting and so too must the equipment on which today’s armies rely. The world’s more technically advanced defence forces are increasingly able to identify firing positions and counter them quicker than ever before. It has also been suggested some state-backed groups are also making use of these advances, increasingly using high-tech weaponry in conflict zones. The ongoing conflict in east Ukraine is a prime example of this, where Ukrainian forces have been located and attacked, pushing up casualty numbers.

Major Michael Johnsson of the Danish Army, a mortar specialist in the Artillery Regiment, believes mobility will be critical for future mortar systems, particularly given advances in technology to locate them. “Fighting a near-peer adversary, you need mobile and autonomous mortar systems to avoid the risk of counter fires,” he says.

The Danish Army, however, isn’t just looking at what’s happening now when procuring new systems. The experience of Afghanistan left a lasting legacy; there, most of the soldiers killed or injured were victims of IEDs. Johnsson says the experience showed there was a need for battalions to have their own indirect firepower assets. “In Denmark, we want a very high level of protection on the vehicle that we’re buying,” he says. “It’s all based on those casualties we suffered, especially in Afghanistan.”

For many years, deciding on which mortar system best meets your needs has been a challenge. Larger systems generally provide greater firing ranges; however, they are not as easy to mobilise, which leaves units at risk. Part of the answer is system autonomy – self-propelled units that do much of the preparatory work. Once the mission is complete they can use the ‘shoot and scoot’ concept to get away from danger.

“Equipped with an inertial navigation unit and automatic laying system, new mortars are now able to shoot and scoot. They will be mounted on a vehicle to stay just a few minutes in position,” says a spokesperson from the French Army Artillery School. They explain that system designs are looking to address how mortars can be more easily switched from their firing position to being mobile, taking them out of harm’s way more quickly.

Johnsson agrees, warning that the ability of some enemies to locate fire support assets and take them out is a chain that needs to be broken. “If you want to survive to fight an enemy like that, you really need mobility. That’s why we need to hide somewhere, receive the fire mission, move out of your hiding position, do the job and disappear from that position as soon as possible.”

This vulnerability has led some armies to look at systems that offer enhanced survivability and protection, using autonomous technologies to reduce the risk of counter attack. “We want rugged systems connected to command and control systems that automatically joins the firing elements,” says the French Army spokesperson. “They need to be integrated on wheeled platforms that will give them good mobility and protection.”

The future of mortar fire

In 2023, France will take delivery of the first of its 54 Thales 120mm 2R2M (Rifled Recoiled Mounted Mortar) system, known as the Mortier Embarqué Pour l’Appui au Contact (MEPAC) unit. MEPAC replaces the VAB mortar carrier and towed variants, which have been a growing cause for concern due to its increasing cost of maintenance. The new unit will be mounted on a VBMR Griffon 6×6 light armoured vehicle, and will only require soldiers to load the mortar and charge before the system takes over to complete the firing process. Having loaded the mortar via a hatch, protecting personnel from enemy sight, the unit can fire up to 10 rounds a minute.

“This new mortar is our former barrel, which is now mounted on a new heavy and protected wheeled chassis which is fully automated,” says the French Army spokesperson. “Our two mortars will share the same family of ammunitions, of course. The Griffon chassis is a 26t wheeled armoured vehicle that will be shared with other arms, particularly infantry.”

The first delivery of the Griffon was taken in July 2019, with hundreds more due to be delivered. The Danish Army is also revitalising its indirect fire support capability through the Danish Defence Acquisition and Logistics Organisation. It will take delivery of the CAESAR 155mm/52 calibre selfpropelled artillery system, a product of France’s Nexter Systems. Replacing the M109A3 155mm/39 calibre tracked self-propelled system currently in use, the unit will be positioned on a Tatra 8×8 chassis. Boasting semi-automatic ammunition handling – up to 36 mortars and charges – the unit can carry four personnel in a fully protected control cab. It also offers “improved cross-country mobility”, according to the manufacturer, helping address the concerns over manoeuvrability and protection.

In 2015, as part of a separate $650 million contract, the Royal Danish Army also ordered Piranha V 8×8 armoured personnel carriers, jointly manufactured by General Dynamics European Land Systems and Mowag, some intended for use with mortar systems. Johnsson says this project was challenging given the procurement requirements, in particular, the need to combine the system with the armoured personnel carrier (APC). “When we started out writing the requirements for the mortar system, the army hadn’t decided what APC they were going for,” he says.

Johnsson says the army contracted Israel-based Elbit Systems to develop and supply the firing system. “It was not like we were looking for an offthe- shelf mortar system, like having a vehicle with the mortar system built in, it was two projects that had to meet each other. But I think it turned out very well,” he says.

Everything on the system is controlled from a display. Personnel simply unwrap the ammunition, put it on a tray, and the mortar will lay itself and find the right bearing and elevation. “The crew can handle the mortar inside the protected vehicle, which is a pretty high requirement these days,” Johnsson adds.

1916
The 81mm man-portable trench mortar, known as the Stokes 3.2”, is deployed in theatre in the First World War.

2015
The Royal Danish Army order Piranha V 8×8 armoured personal carriers as part of a $650 million contract, jointly manufactured by General Dynamics European Land Systems and Mowag, some intended for use with mortar systems.

2019
The first VBMR Griffon 6×6 light armoured vehicle is delivered to the French Army, with hundreds more to come, which are due to be outfitted with the 54 Thales 120mm 2R2M (Rifled Recoiled Mounted Mortar) system.

Still a role for the old school

Johnsson doesn’t believe that this next generation of mortars spells the end for what he calls “old school systems”; the existing technology is inexpensive and already proven. Also, although conflict is changing, in many ways the same challenges remain. “You still have these asymmetric conflicts, scenarios like Iraq and Afghanistan, where your enemy are guys with RPGs [rocket-propelled grenades] and PKMs [Pulemyot Kalashnikova machine guns]. Here you won’t need high-tech weapon platforms – that’s why I think you will see the old-school mortars being around for many years to come,” he concludes.

It’s a view supported by the French Army spokesperson, who says France has deployed its heavy mortars successfully in all areas in the world since 1973. “We know that we can trust our mortar and its ammunitions. Both are combat proven.”

However, they add the issue of survivability and protection for peer-to-peer operations is critical for the next generation of mortars. “Consequently, rapidity of action is the key factor of efficiency for the future. New technology could help avoid counterbattery fires and hit furtive targets faster.”

It’s clear, given what the French and Danish have experienced, that mortar systems will continue to evolve. The munitions and firing techniques will likely not change too much, although some advances are taking place, but the challenges facing those using the mortar system will continue to shift. Greater mobility and protection will answer some of those challenges, but there is an inevitability of conflict: lives are and will likely always be at risk. 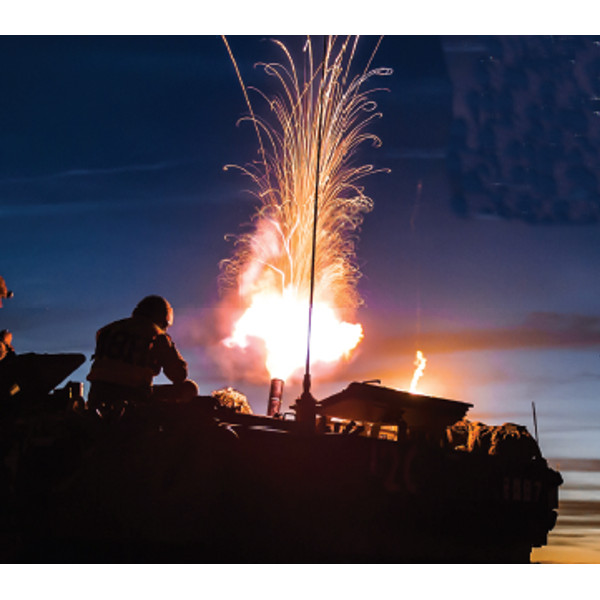 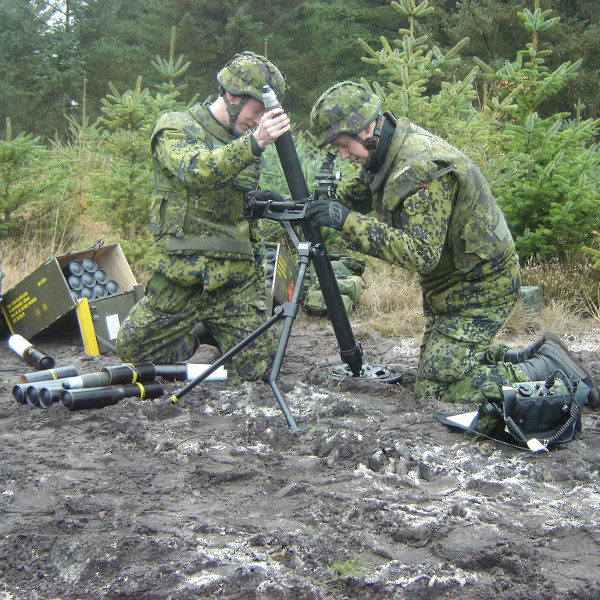 Due to the needs of low-intensity conflicts, light infantry and Special Forces, there will be demand for old-school mortars for years to come. 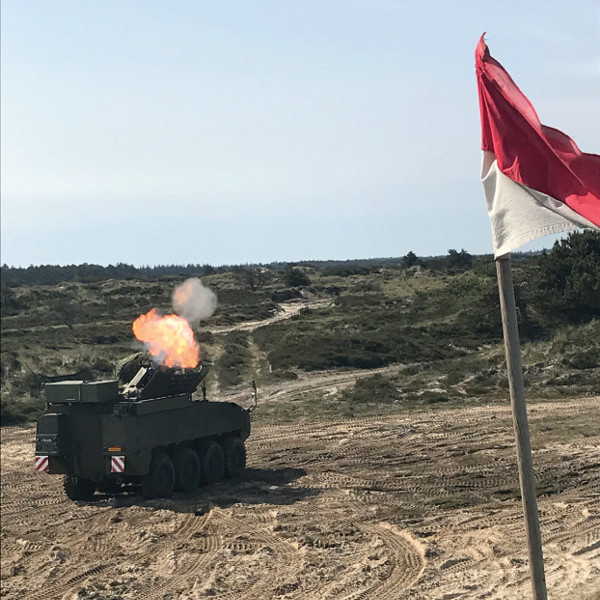 120mm CARDOM 10 built into a GDLS/MOWAG Piranha V during a ‘shoot and scoot’ test in Denmark. This system is design to take on an enemy who is at a high technical level.
Post to: