Ready for a renaissance: the UK's naval facelift

The UK defence secretary has promised a ‘renaissance’ in British maritime power with significant investment across the board. But with the budget heavily dented by new carriers and a replacement for Trident, is the money there for investment in key areas? Dr Gareth Evans offers an analysis.

On New Year’s Day 2017, then UK Defence Secretary Sir Michael Fallon announced “the start of a new era of maritime power”, which would see the government “investing billions in growing the Royal Navy for the first time in a generation, with new aircraft carriers, submarines, frigates, patrol vessels and aircraft all on their way.”

With the first of the next generation of carriers safely delivered a few months later, in September, the defence secretary unveiled a new National Shipbuilding Strategy (NSS), focused on the first batch of the new Type 31e frigates, which are due to enter service from 2023.

It comes in response to Sir John Parker’s independent 2016 shipbuilding review, which put forward a series of far-reaching recommendations aimed at boosting shipyards, regional economies and the maritime supply chain in general.

The end result would be, according to the NSS, “a strong, vibrant and globally competitive UK shipbuilding and maritime engineering industry, capable of winning business in the military and commercial markets, at home and overseas”. In short, it promises a ‘renaissance’ in the UK industry, but will we really look back on 2017 as the “year of the Royal Navy” as the Ministry of Defence (MoD) boldly claimed on 1 January. And is the UK’s naval shipbuilding ready to experience the pangs of its own rebirth?

The maritime industries, as a whole, support 6,800 companies and employ around 11,000 people in the UK, contributing £13 billion each year to the national economy, with the shipbuilding and repair sector alone accounting for a little over 15% of that. However, while the UK remains one of the largest exporters of maritime systems and equipment, an effective monopoly currently exists when it comes to shipbuilding for the Royal Navy, as Sir John Parker notes in his review. “BAES’ Govan and Scotstoun sites are the only UK shipyards currently used to design, build and commission a sophisticated naval warship. This is currently an exclusive position held under the Terms of Business Agreement between BAES and MoD,” he writes.

Elsewhere in the industry, Parker argues, there is a renaissance already under way, with a variety of regional shipbuilding companies, which are competing successfully in diverse markets such as ship and offshore conversions, repairs, offshore wind farms and other contemporary maritime engineering projects.

“There is no single customer dependency culture visible in these shipyards, but rather an entrepreneurial attitude and an enthusiasm to embrace change, along with flexible skilled labour practices with the ability to manage fluctuating workloads,” he writes.

While taking nothing away from the talent and expertise of BAES, Parker suggests that if the MoD were able to harness the wider UK supply chain and optimise the type of work with the most economic supplier, savings could be made, and competition boosted.

Although primarily intended to bolster the Royal Navy’s depleted fleet, the hope is that the new design of warship will also gain orders from international buyers, with the shipyards involved being encouraged to seek global partners to make the vessel competitive on the export market.

With the Type 31e, it seems the government has heeded the advice. Plans are in place to purchase at least five of the new frigates, with the work to build them being shared across UK shipyards, and final assembly taking place at a central site – the same kind of distributed block build approach that worked for the Queen Elizabethclass carriers.

Although primarily intended to bolster the Royal Navy’s depleted fleet, the hope is that the new design of warship will also gain orders from international buyers, with the shipyards involved being encouraged to seek global partners to make the vessel competitive on the export market. Having a cost cap of just £250 million a ship will obviously help here, too, as well as enabling the MoD to try to squeeze still more savings out of the defence budget.

Looking further ahead, the same thinking will be applied to other vessels. All Royal Navy warships will continue to be built to a wholly UK-owned design, and fabricated and integrated in UK shipyards, but it will be through a competitive tender, while open competition will be the rule for other navy vessels. There will, however, be a new and distinct edge of ‘UK-first’ to that process wherever possible, as the NSS specifically charges the MoD to take “the impact on British prosperity” into account when making its procurement decisions and, in all cases, the integration of sensitive UK-specific systems will be done in the UK.

In addition, the NSS also says “the government is working hard to make sure that UK producers of steel have the best possible chance of competing for contracts”.

On the face of it, all of the pieces seem to be in place to breathe new life into the UK’s naval shipbuilding industry.

However, at a time when costs already need to be cut to fill the hole in the defence budget left by the navy’s existing round of new acquisitions, can five price-capped frigates for the domestic market, even with the chance of further sales abroad, really start a renaissance?

A day after the NSS was announced, Defence Minister Harriett Baldwin launched the procurement plans for the Type 31e frigates, which, she said, would “re-energise a world-leading, vibrant and competitive UK shipbuilding industry”.

As Tony Douglas, the chief executive officer of Defence Equipment & Support pointed out, the programme has set tough time and cost constraints, and challenges everyone involved to deliver the new warship in a different and more innovative way than has been seen in the past.

All of that may well be true, but the core requirements of the vessel itself could hardly be more basic, or arguably more vague, leaving this new frigate seemingly destined to be unambitious and distinctly underwhelming, with rather too many capabilities ‘fitted for, but not with’.

Calling it just a ‘beefed up’ version of an offshore patrol vessel, as some of its fiercer critics have, seems somewhat harsh, but taken on its bald minimum specs, the frigate does not appear to represent so very much of a leap from the River class.

How well it plays on the international market could be one of the principal deciding factors in whether the renaissance begins to take root, or simply withers and dies.

Even if Type 31e does do well on the global market, export successes are like swallows – a single one does not guarantee sunny days ahead – and sustaining the impetus required for any fledgling rebirth to continue to grow and thrive will need to be an ongoing process.

That will mean a sizeable level of investment and almost certainly need significant orders for some big ships to be built in UK shipyards over the coming decades.

The problem is, that when it comes to anything other than ‘complex’ combat ships that must be UKbuilt, the nation’s shipyards will be competing with foreign shipbuilders that enjoy the economies of scale from building more tonnage already and often enjoy cheaper labour costs, too. UK companies may struggle to ensure their gains do not come at the Royal Navy’s expense; in that sense, it threatens to be a zero-sum game – or worse, if less capability comes at the higher price.

Building a five-strong run of new frigates in blocks is unlikely to do much on its own to revitalise the sector from its current position. Take the decision to go down that same block-built-in-Britain route for any and all new large vessels, starting with the MARS Fleet Solid Support – big, complex ships only eclipsed by the new carriers themselves – and the rebirth of UK naval shipbuilding would be, if not assured, then at least set on the right course.

Even if Type 31e does do well on the global market, export successes are like swallows – a single one does not guarantee sunny days ahead.

Ultimately, if UK naval shipbuilding is to be reborn, the navy needs to be buying ships, and, given the dent punched in the defence budget, that could be a hard sell, not least to the other armed services. Will it be a renaissance? As Jerry Maguire says, “show me the money”. In the end, it all comes down to investment. 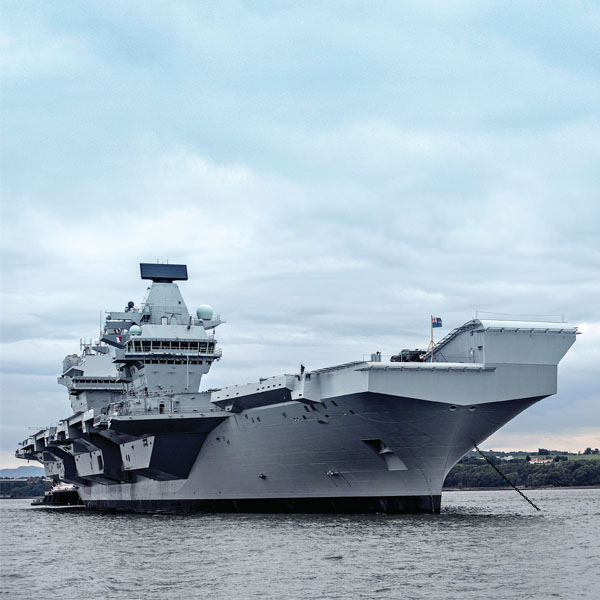 HMS Queen Elizabeth under anchor awaiting low tide before departing at the start of vital system tests off the coast of Scotland. 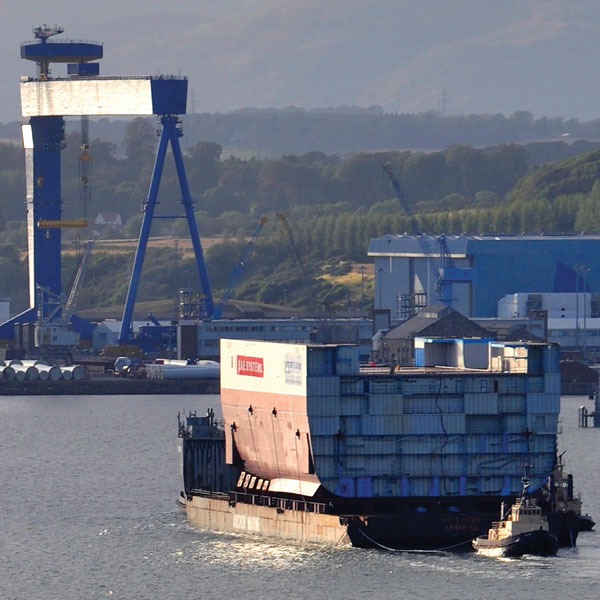 A section of the superstructure for the new CVF Queen Elizabeth-class aircraft carrier arrives at Rosyth in Scotland. In the distance is the giant Goliath crane that was used to piece the 65,000t carrier together in the specially altered dry dock at the Babcock’s Rosyth yard. 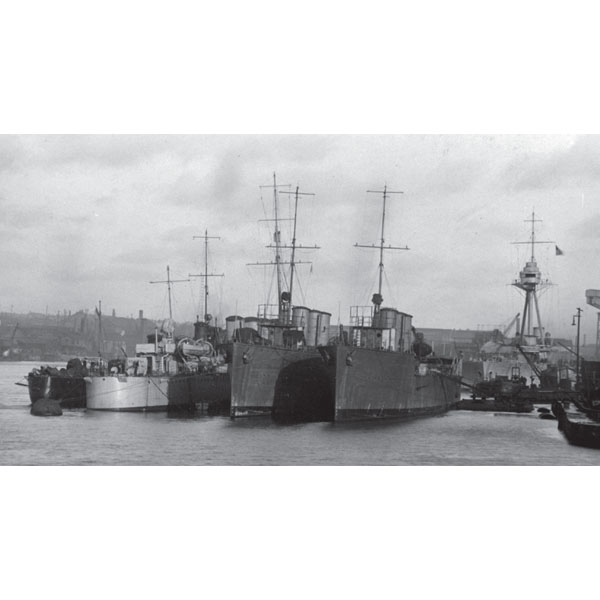 HMS Marksman, HMS Talisman and HMS Termagant moored at the Hawthorn Leslie shipyard, Hebburn, in November 1915. One of many busy UK shipyards at the time, it built two light cruisers, three destroyer leaders and 25 torpedo boat destroyers during the First World War. 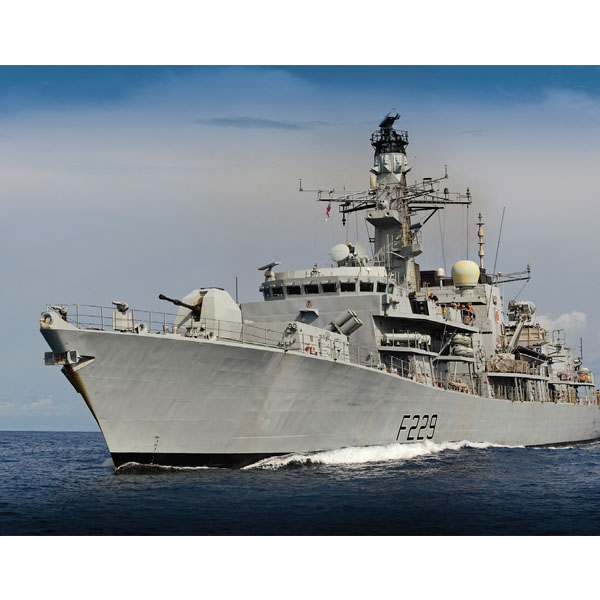 HMS Lancaster was built on the Clyde as the fourth of the Type 23 frigates joining the fleet in 1992. Future generations of warships may soon be being built at other UK shipyards.
Post to: