Getting the right supplies to the troops that need them is one of the most fundamental aspects of military life. Computerised models can help, but older varieties are too slow and inaccurate to really make a difference. Andrea Valentino talks to Dr Joseph Myers, the US Army Research Office mathematical sciences division chief at the Combat Capabilities Development Command’s Army Research Laboratory and Professor Brandon McConnell of North Carolina State University, about the limitations of current modelling systems, and how a new approach could transform military logistics.

For centuries, logistics was a rustic affair. Troops would simply forage what they could off the land, or steal it from uncooperative peasants. In the Napoleonic Wars, cavalrymen had special ‘foraging caps’ they would wear when they went out to find hay for their horses.

The situation was even tougher for infantrymen. As a column advanced down the same roads, the soldiers at the back often discovered that their comrades further forward had stripped a farm bare by the time they arrived.

$35 billion
In goods and services are reported to be provided by the US Defense Logistics Agency each year.
DLA

From these wobbly beginnings, of course, logistics has developed into one of the most sophisticated and important corners of military life. The US Defense Logistics Agency reports that it provides over $35 billion in goods and services each year. Nonetheless, modern logistical systems still suffer from a number of problems, particularly when it comes to speed and precision. Not that the situation is hopeless. By using sophisticated modelling programmes, logisticians are starting to transform military planning.

From the pictures on CNN, Operation Iraqi Freedom looked like an easy victory. Over 175,000 coalition troops surged north out of the Kuwaiti desert in March 2003, and supported by nearly 2,000 aircraft, they had advanced to the Baghdad suburbs in little over a week. Enemy morale disintegrated. As well it might. Every night brought more videos of precision bombs screeching into Iraqi positions. Around 29,199 bombs, rockets and missiles were dropped in total, each explosion snapping light into the damp spring air.

But beyond these unforgettable images of American might, the situation in the field was far wobblier. By the time it reached the Iraqi capital, the US Third Infantry Division found that its equipment readiness had dropped by 20%, simply because it ran out of spare parts. It took close to a year for the supply chain to flow properly again. At the same time, the army had to abandon huge stockpiles of medical gear: it expired before it could be deployed to the soldiers who needed it.

These muddles probably have something to do with the creaky state of army logistics. Even as the US spent nearly $700 billion in 2019 on defence, supply systems have lagged behind. Just a few decades ago troops relied on practices that had hardly changed since Pearl Harbour. “Logistical needs were estimated out of a 4in-thick, decades-old document based on large-scale operations from the past,” explains Dr Joseph Myers, an army veteran of 30 years and the US Army Research Office mathematical sciences division chief at the Combat Capabilities Development Command’s Army Research Laboratory.

Though computer models now do most of the legwork, calculating what troops will need and when, is still an inexact science. The Logistics Estimation Workbook (LEW) is a case in point. Though the tool can accurately predict what soldiers will require under normal conditions, it struggles to account for operational considerations, such as the type of terrain they will be engaged in. That soon causes problems, says Professor Brandon McConnell, another ex-soldier and an academic at North Carolina State University, who works with Myers on sharpening military logistical tools.

“If you and I were to sit down and design a potential operation in a part of the world – let’s say for 90 days – and were to change the location from jungle to arctic to desert, or if we were to change the intensity of the operation from training local forces to a very intense combat operation, the army would, right now, not adjust the repair parts needed.” Of course, McConnell continues, “the army knows” that helicopters or tanks will wear differently in the Hindu Kush compared to the Iraqi desert, but “current tools don’t account for that”.

To make matters worse, current logistical models are painfully slow. It can take several days to run a model, and several months to get full reports back – hardly useful if you have a division of enemy tanks bearing down towards you. That would have been bad enough in the years before 1991, when NATO operatives spent literally decades planning their defence of Western Europe from the Soviets down to the bullet. But in our frantic, multipolar age – where US troops are deployed to fight Islamists one week and Ebola the next – time is even shorter. “Uncertainty is driving the need for us to help decision-makers faster,” McConnell says. “They now have to make decisions whether or not we have the information ready.”

Top of the class

In 2012, army logistics finally began to stumble towards the modern age. Its new enterprise resourceplanning system (usually known as ‘GCSS-Army’) lets logisticians monitor supplies across the entire military machine, ordering more materiel as needed. This scenic view of army logistics is already proving useful, saving logisticians hours of work and their accountants billions of dollars. One senior officer has even called the new system “the most significant positive change in army logistics this decade”. No wonder over 600 army warehouses have already been fitted with the software, and hundreds more are set to be adapted soon.

It was on these robust foundations that McConnell and Myers developed their own predictive logistical model. McConnell is clearly excited about its potential, going as far as calling it a “game-changer”. This is probably not hyperbole: though the new Military Logistics Network Planning System (MLNPS) programme can’t use the latest GCSS-Army data, even relying on older reports is far more accurate than older computerised techniques, let alone grubby booklets.

Unlike older models, meanwhile, the MLNPS into account. If an operation is modelled to take place in winter, for example, or in a region without many airfields, the MLNPS can predict how that will change supply requirements. Enemy strength can be factored into the model too. Nor does the MLNPS simply pump out general recommendations. Rather, it gives detailed suggestions based on different ‘classes of supply’ – the system that the US Army arranges its various logistical needs. As Myers explains, that could cover anything from food and water, to medical supplies and defensive helmets.

If all that sounds devilishly complicated, it probably is. Yet McConnell is keen to stress that even as his model hums with calculations, he wants to avoid the kind of hold-ups that blighted Operation Iraqi Freedom. “We’ll cut value-added methods if they take too long to compute,” he says. “If there’s a mathematical or data analytics method that would help – but takes too long to calculate – I won’t even consider adding it in.” That might be risky if planners took the MLNPS as gospel. But as McConnell explains, his model is only meant as a crutch for a general and their staff, who ultimately know what their soldiers need far better than a computer. All MLNPS is there to do is “help illuminate the decision space”.

And so it is with logistical modelling. As recently as 2015, when he first investigated their use, McConnell was surprised to discover that no one in the military was “working actively on decision support and logistics planning models”. Fortunately for army planners, this is changing, and the MLNPS is just the start. For example, the army recently began funding a toolset that could predict the maintenance needs of military vehicles, including the M1A2 Abrams tank.

$693 billion
The amount the US spent on defence in 2019.
Office of the Under-Secretary of Defense

A similar model helps logisticians parcel up troops efficiently, McConnell continues. “If I take a unit, and need to split it off, or create a new unit, how do I take excess property and assign it to them in an efficient way so I’m not burdening them with administrative requirements?” To put it another way, then, the “big green machine” finally seems to be whirring to life, and just as well. MLNPS and tools like it promise to save the army time and money, especially now that troops no longer have to worry about tramping past the same field at once to get fed. actually takes the tough practicalities of military action 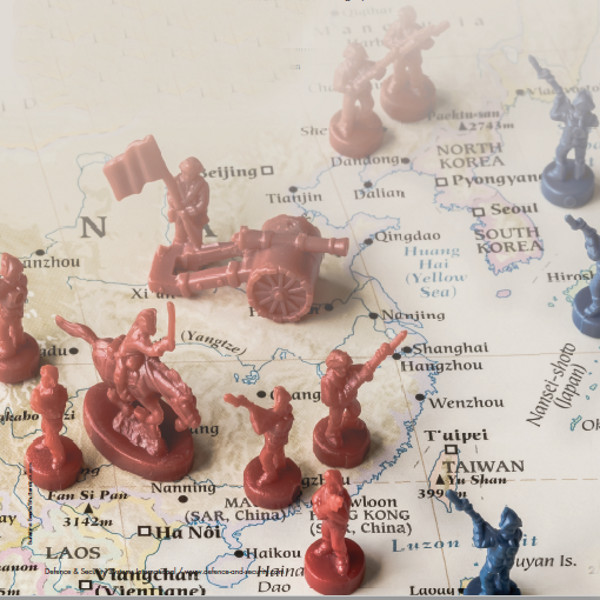 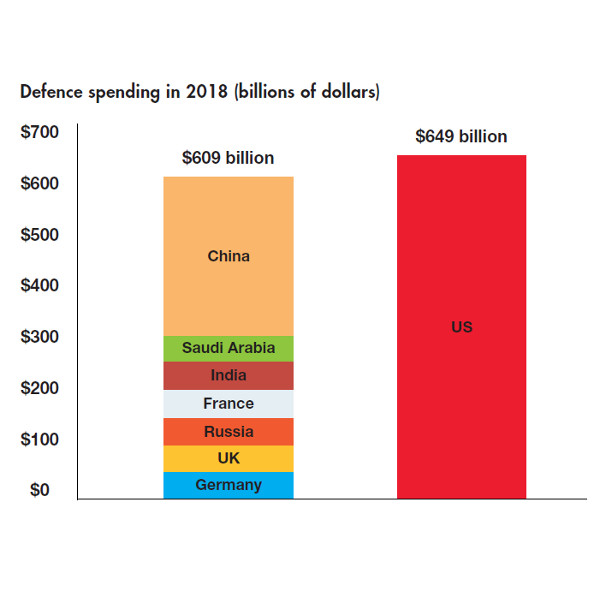 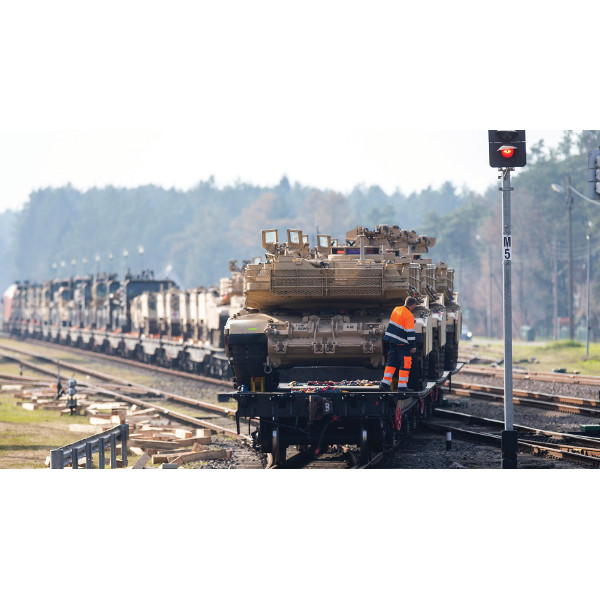