A Gripen fighter jet roars overhead, making a low pass with its afterburner fully lit; in an instant, the pilot pushes back on the control stick, pointing the nose skywards in an almost-vertical climb. As it streaks above, the pilot ejects flares to evade any heat-seeking missiles that might be locked on. Once at the desired altitude, he acquires the target and releases his load of Mk82 bombs to subdue enemy forces on the ground.

The bombs score a direct hit, rippling the surrounding area with deafening booms.

This might sound like the beginning of a dangerous air conflict, but it was in fact the start of a two-day firepower event that showcased the capabilities of both the South African National Defence Force (SANDF) and Rheinmetall Denel Munition (RDM).

Bring out the big guns

The Ammunition Capability Demonstration (ACD) took place at Denel’s Overberg Test Range in Arniston in March, with VIP delegates invited from all over the world to view the impressive display. Visitors saw the SANDF roll out a range of land equipment, including direct-fire and indirect-fire assets, as well as aircraft and even a naval gun (albeit on land).

During the first day, the live-fire event continued into the twilight hours so that the SA Army could demonstrate how it can light up a battlefield using illumination rounds fired from mortars and artillery pieces.

The 155mm illumination round fired from a howitzer, manufactured by RDM as the M2003, can effectively turn night into day, burning at the equivalent of one million candles. There’s also an infrared version (M0236) available that brightens the area for anyone wearing night vision goggles.

Each round fired by machine guns or largercalibre cannons would also create a red streak into the distance as the tracer round’s pyrotechnic charge ignited.

The next day culminated with a large armoured infantry attack, with the SA Army’s indirect fire systems, including 127mm rocket launchers, as well as main battle tanks and attack helicopters providing fire support.

The South African Army also used its new, highly mobile T5-52 self-propelled howitzer, which can fire a range of ammunition natures including the long-range velocity-enhanced artillery projectile (VLAP) that reaches out to 54km. The T5-52 is being acquired as a possible replacement for South Africa’s ageing G6 artillery piece that has been in service since the late ’80s.

As the enemy positions were barraged with artillery fire, the army’s vintage Ratel infantry fighting vehicles – manufactured in the ’70s and used extensively during the long-running South African Border War – advanced to the contact area, firing their 30mm cannons and eventually dropping off infantry soldiers to overrun the enemy positions.

Soldiers, armed with Vektor R4 5.56×45mm rifles, cleared positions of any remaining fighters, ensuring that the mission was completed successfully.

The demonstration clearly shows that South Africa retains a potent array of military technologies that can deliver a heavy weight of firepower when required. However, it is one of the SANDF’s only opportunities to bring together such a large number of weapon systems from across the warfighting spectrum, and for so much ammunition to be expended.

Prolonged funding cuts to the SANDF have effectively made large-scale exercises a rarity, and equipment maintenance and availability has suffered. This has resulted in capability gaps opening up across all domains.

“The primary challenge facing South Africa’s armed forces remains the mismatch between funding and commitments,” said recent analysis by the International Institute for Strategic Studies, a London-based think tank. “While the [defence] budget has remained more or less constant in US-dollar terms over the past few years, it was inadequate to begin with and has not matched inflation.”

“In South Africa, you have an environment where [defence expenditure] is not growing and the rest of the world is growing.”
Norbert Schulze, Rheinmetall

One officer claimed that South Africa does not have any significant existential threats, especially peer adversaries, which is the main driver for defence spending increases in regions such as Europe and Asia. “South Africa has not been in a conventional conflict for more than 30 years now,” the officer said. “I know that Europe, for instance, is more and more sensitive to what is happening [in defence], and they are scaling up, but we are not in that security framework.”

That means that the SANDF has to make key strategic decisions going forward when it comes to modernisation; for example, whether certain equipment needs replacing or certain capabilities can be removed completely. The army is currently acquiring just six of the new T5-52 self-propelled howitzers – enough to equip a battery – by around 2021, but is deferring a decision on whether to buy more to replace the legacy G6. That decision is not likely to be made for another few years.

The SANDF’s legacy Ratel armoured vehicles are now showing their age and, subject to budgetary conditions, are being replaced.

A notable absence from the demonstration was the army’s new infantry fighting vehicle, known as ‘the Badger’, which is based on the Finnish-built Patria AMV and is set to replace the Ratel. This project has also been beset by delays owing to budgetary issues.

Unsurprisingly, this budgetary uncertainty has also had an effect on South Africa’s once strong domestic defence industry, which is now a shadow of its former self. Companies such as Denel Land Systems – manufacturer of the T5-52 and other vehicles and weapons on display during the demonstration – have struggled in recent years.

Denel is hoping export orders can reverse this – officials have confirmed that the company is in advanced negotiations with an Asia region customer for the T5-52.

RDM – a joint venture between Denel and German defence behemoth Rheinmetall – has a significant international customer base, insulating it from the lack of contracts from its domestic customer. The company’s CEO, Norbert Schulze, claimed that 85% of the group’s sales are now from export customers and rising defence expenditures in regions such as Europe and Asia, and that is likely to increase to 90–95% over the next five to six years.

“In South Africa, you have an environment where it is not growing and the rest of the world is growing,” he said, adding that the Asia-Pacific and Middle East were particularly strong markets.

Despite these underlying worries regarding South Africa’s commitment to defence going forward, the Ammunition Capability Demonstration was an impressive display and a key opportunity to see the innovations currently taking place in the country’s ammunition sector. It also gave an insight into an often under-reported SANDF, which can still provide an all-arms offensive capability if the need arose.

Builders of the Badger

The contract to build the South African Army’s new Badger armoured vehicle was awarded to Denel Land Systems in 2007, and the first prototype was completed in 2010. The vehicle’s steel hull is designed to offer protection from shell splinters and small-arms fire, while LMT Flat Floor Technology counters landmines and improvised explosive devices. A modular combat turret (MCT) system allows a range of integrating weapons modules to be used.

The intention was for the Badger to replace the Ratel IVF – nicknamed the Honey Badger – by 2022, but delivery of the vehicles has been pushed back, meaning that 2022 will only see the arrival of the first of the Badgers. “We are engaging with the customer to determine ways in which Denel could achieve the contract requirements despite the delays,” the company stated in its 2018 annual report.

Denel Land Systems has suffered serious internal turmoil in recent times, with a new board appointed in April 2018 to tackle financial woes and corruption. The company reported losses of R1,758 billion in 2017/18. 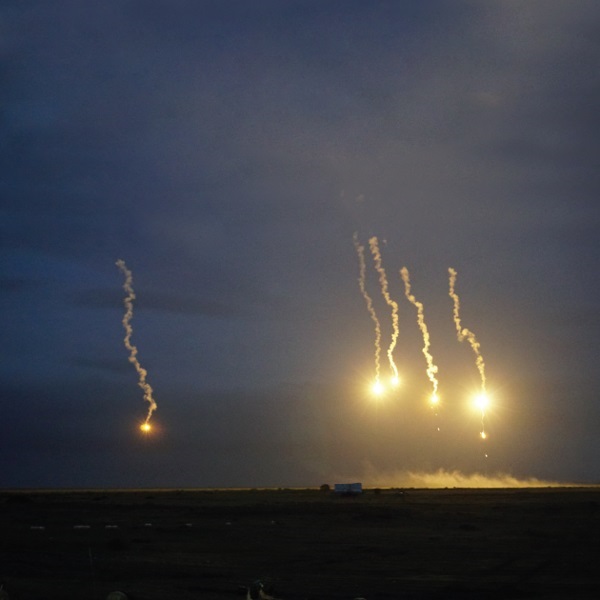 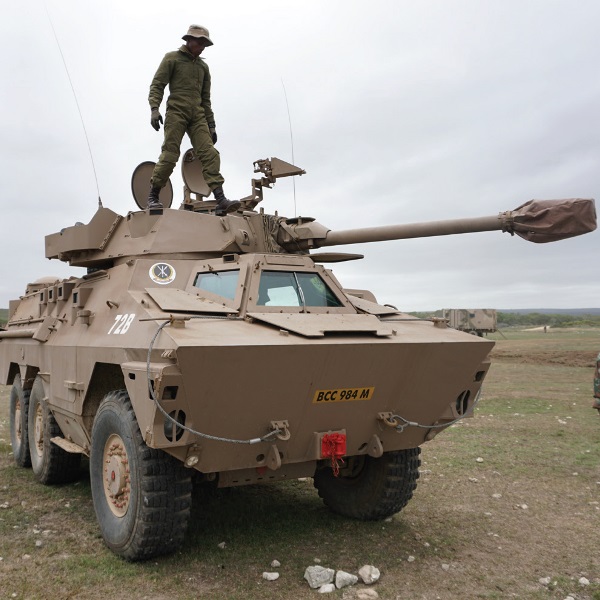 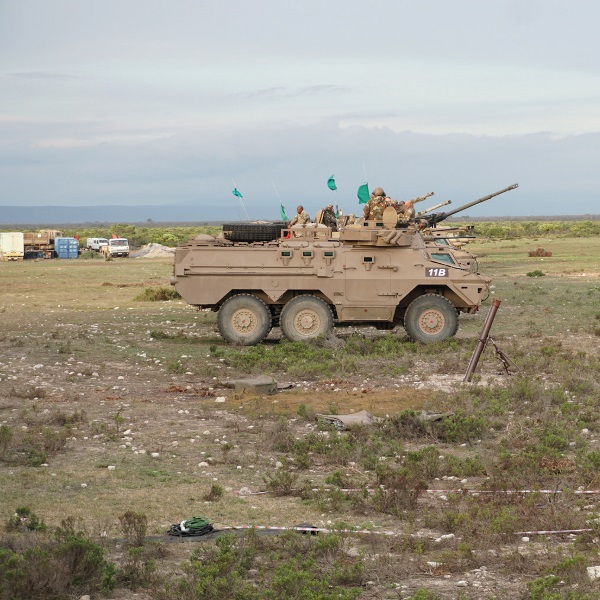 A number of Ratel vehicles and mortar cannons preparing to conduct a long-range artillery bombardment.
Post to: