Counterterrorism analysis: avoiding the mistakes of the past

In modern times, a number of state and non-state actors have increasingly taken a provocative stance on the world stage, in some cases carrying out a variety of military and cyberspace attacks. Dr Muhammad Fraser-Rahim, North America executive director at the counter-extremism think tank Quilliam International, explains why governments and counterterrorism experts must be vigilant when dealing with these organisations, in order to learn from past mistakes.

For more than a decade, I worked as a US Government counterterrorism and political analyst at the Department of Homeland Security, the office of the Director of National Intelligence and the National Counterterrorism Center.

During this time, I worked primarily on the evolving threat from transnational terrorist movements in the form of al-Qaeda, Al Shabaab, Boko Haram and the so-called Islamic State, seeking to understand terrorist recruitment methods, motivations and the various techniques, tactics and procedures these groups use to spread their ideology and influence.

On top of this, focusing thematically on counterterrorism issues more broadly, the role of a good analyst – which I learned during my first days arriving at the Sherman Kent School for Intelligence Analysis – is to be open minded and understand all threats and hazards. This philosophy has become increasingly, and critically important now, during my time outside of government. I currently work at and lead Quilliam, the oldest and first counter-extremism organisation focused on challenging extremism in all its forms.

Earlier this year, a private security firm published a report indicating that North Korea continues to expand its operations using hackers and a robust network of cybersecurity intelligence professionals to steal, and penetrate government and private organisations’ intellectual property.

Over the past year, the international community has been confronted with a number of state and non-state actors who are increasingly asserting a provocative stance, using overt and covert advanced technology, chemical weapons and proxy forces to carry out their aim and mission. For policy analysts who are observing these threats, which range from the Korean peninsula, to the Middle East and the continent of Africa to name a few, the pace and momentum with which these events are happening can be hard to keep up with.

In the case of the Korean peninsula, the international community has been in limbo to determine the exact aim and motivation of Kim Jong-un and Pyongyang, who strongly signalled to the global community that he was willing to shift his decades-long position of provocation and a nuclear weapons showdown, but in recent weeks we are all watching to see what will happen next and if, in fact, there might be a change in direction.

Furthermore, it doesn’t help that President Donald Trump’s recent revocation of Obama-era policies and withdrawal from the Iranian nuclear deal gives possible fuel to North Korea and its sense of stability that Washington is planning to be a fair and honest broker at the table to change the direction of tensions between the two nations. In addition, North Korea has also diversified its portfolio in a posture of aggressive intelligence gathering and cybersecurity operations, like many other organisations, state and non-state actors.

Earlier this year, a private security firm published a report indicating that North Korea continues to expand its operations using hackers and a robust network of cybersecurity intelligence professionals to steal, and penetrate government and private organisations’ intellectual property. In general, these hackers are targeting government, military, defence, finance, energy and electric utility sectors in the US and throughout the world. This aggressive posture shows how states like North Korea continue to diversify their approach. It remains a concern for analysts to monitor.

Russia is among the states that have been re-establishing their bona fides on the world stage. It played an integral role in the Syrian conflict, providing a hazy display of challenging the spread of the Islamic State in Syria and Iraq, all while being closely aligned and aiding the Syrian regime, as it carried out attacks against innocent civilians inside its territory.

The Russian state has played an active role in the US elections, working its historical Cold War tactics in the US’s backyard and employing aggressive information operations. Like North Korea, it has been engaging with multiple fronts to increase its visibility and presence, demonstrating its role and relevance to the world. The actions by the Russian state on UK soil – an apparently targeted assassination attack using a Soviet-era nerve agent known as novichok that left a former Russian double agent and his daughter in hospital – further demonstrates the nation’s aggressiveness to go to all lengths to target dissidents – and kill them if necessary.

For many nation states, a new era has emerged, in which relevance and adaptation are more important. Gone is the era of isolation and countries only being able to operate within their own borders. Nations are finding it necessary to stay relevant and adjust to a changing world that is driven by capitalism and globalisation. Many are channelling a bygone imperial era: in the case of Russia, it is the czar; in Turkey, the Ottoman sultan; and in China, it is the role of the emperor. This has taken on symbolic and geopolitical meanings, as these states seek to compete in a changing world filled with emerging threats.

Countries aren’t the only ones using historical and cultural motifs: terrorist organisations are even doing so, including many Islamist groups that use events in Islamic history to rally new and old recruits. Islamic State and al-Qaeda repeatedly use normative Islamic themes and apocalyptic narratives to demonstrate an ‘endof- times’ justification for carrying the battlefield to Syria. Various schools of Islamic interpretation highlight that the beginning and end of final days of judgement will take place in present-day Syria.

In 2011, an offshoot of al-Qaeda in the Islamic Maghreb, known as the Movement for Oneness and Jihad in West Africa, was created because West Africans wanted to splinter from the Arab-dominated leadership and create their own organisation. To this end, they claimed to be the ideological descendants of Shaykh Ahmadou, Usman Dan Fodio and al-Hajj Umar Tall – all key historical figures in Islamic and West African history.

Why is all this important? How do governments stop these efforts? Are nation states and transnational terrorist movements collaborating? Intelligence and state security services around the world are increasingly confronted with having to stay up to date with emerging threats that require a deep level of understanding of historical, cultural and transcontinental issues.

More questions usually come to the forefront than answers, but for security services around the world, seeking to understand these emerging themes and topics is vital in finding solutions. Despite intelligence failures still being a concern, alongside the coordination of information either between political agencies within the same country or different governments, countries must find effective ways to learn from past mistakes in order to stay ahead of the curve.

By pushing for innovation, a forwardthinking approach and incorporating technology when appropriate, security services will have a comparative advantage in identifying threats before they emerge.

Where are we now on chemical weapons?

According to the Arms Control Association, roughly a dozen countries have chemical weapons programmes and at least 13 are pursuing biological weapons. These programmes continue to remain a threat to the international community and the uptick in the proliferation of these efforts focuses on two regions: Asia and the Middle East.

Of equal importance are terrorist organisations: though they do not have the large-scale infrastructure nor the territorial land mass – despite the attempt by the Islamic State – they are not able to produce these chemical and biological substance on a large scale. These groups, however, will continue to use low-tech methods, including the use of industrial-grade chemical substances to pursue their desired goal to take innocent lives.

Past precedent includes al-Qaeda, which, under the leadership of Osama bin Laden, was able to pursue biological weapons. Although nascent, these attempts have inspired other groups to continue this activity. Governments must work on the prevention stage to limit state and non-state actors from gaining access to these weapons and deter individuals by using international and national laws and regulations to prevent adversaries getting hold of these chemicals, and causing casualties and, ultimately, death. 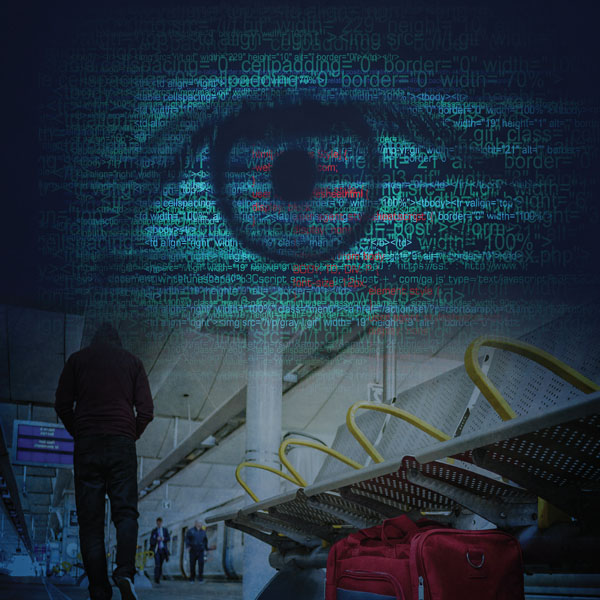 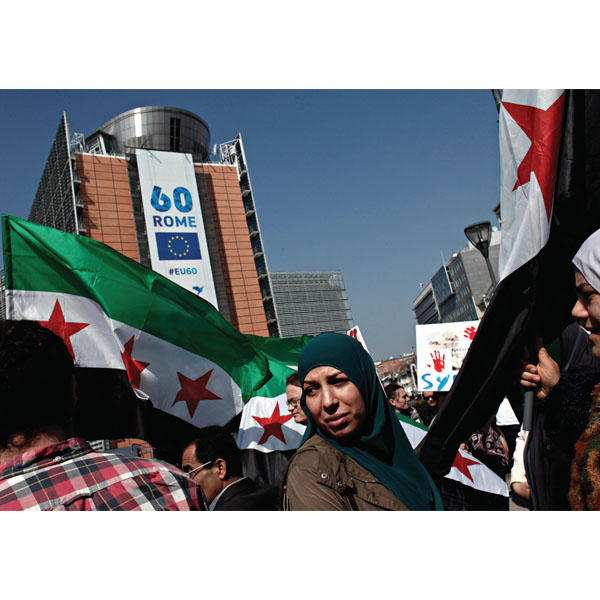 People at Schuman Square mobilising support for Syria following the alleged chemical attack that took place a few days before in Brussels, Belgium, on 8 April 2017. 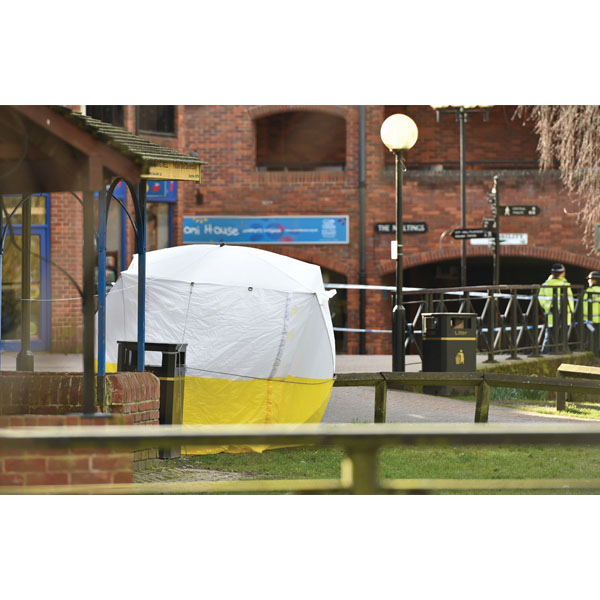 This year, in Salisbury, UK, a police forensics tent was at the scene of the poisoning of Sergei Skripal. A nerve agent was used in the attack on the former spy and his daughter, Yulia.
Post to: