Autonomy on the open sea

Unmanned aerial vehicles have enhanced the capacity to strike targets on the ground remotely. Yet, while conflict in the air has been transformed, drones remain largely absent from the naval theatre. Greg Noone talks to Professor Margaret E Kosal at the Sam Nunn School of International Affairs, and Professor Rosa Zheng of Lehigh University, about how Pacific rivalries and advances in communications technologies could lead to the development of autonomous warships, and all the consequences that could entail.

Recently, a US Navy RQ-4 Global Hawk was shot down over the Persian Gulf by a missile battery operated by the Iranian Revolutionary Guard. Iran claimed the drone had violated its airspace and, in downing the aircraft, it was acting in self-defence. The US, meanwhile, argued that the drone – which is usually flown at a height of 40,000ft – was operating over international waters.

Whatever the precise nature of events, the incident raised the realistic possibility – uncomfortable for both sides – that destroying an unmanned aerial vehicle (UAV) might constitute an act of war. Understanding the history of aerial drones up to this point is critical to appreciating why they have proved so entrancing to Western militaries, and why their naval equivalents have been curiously absent from the battlefield.

“Historians can go back and say people have been trying to fly remotely piloted aircraft and remotely piloted sea vehicles for years,” explains Margaret E Kosal, an associate professor at the Sam Nunn School of International Affairs and an expert in new and emerging weapons systems. The drones we recognise today, however, originated in a US defence appropriations bill in the mid-1990s.

“It initially said that, by 2015, a third of military vehicles were to be unmanned in each of the services,” explains Kosal, who concedes that the US military has yet to reach this milestone. One of the main motivating factors was the opportunity to conduct, without recourse to using soldiers or sailors, all tasks that were deemed “dirty… dangerous, but distant”.

Hence, the US Navy’s intense interest in unmanned underwater vehicles (UUVs). In April, it contracted Boeing to provide five such drones, nicknamed ‘Orcas’, at a cost of $274.4 million. Like UAVs – mainly tasked with surveillance or remote strike capabilities – these UUVs are designed to accomplish the more dangerous, onerous and expensive jobs that tie up naval personnel, including intelligence-gathering, mine-clearing and sinking enemy vessels at longer ranges than their surface counterparts.

The Orcas are scheduled for delivery by 2022, by which time they are expected to overcome the main challenge confronting all navies interested in deploying UUVs: how to communicate with it when it’s underwater. As one might imagine, the incredible distances the vehicle is expected to travel, combined with the capacity of water to interfere with radio waves, makes signalling using traditional methods extremely difficult. In fact, there are just two alternatives, according to Professor Rosa Zheng of Lehigh University. “One is acoustic,” she explains. “But there’s also optical.”

This latter option relies on lasers to issue the drone instructions. Despite impressive download rates at short distances, however, “optical really does not go very far”, says Zheng. Most systems “go about 200m and then die [because] you don’t really see the lights anymore”.

That leaves acoustic methods, which show more promise as, the lower the frequency of the sound, the higher the achievable distance. Unfortunately, this type of signalling is also subject to the law of diminishing returns. “If they have to go 11,000ft, then they need to reduce the frequency to the sound that [only] elephants or whales can hear, which is something like 10–200Hz,” explains Zheng.

Perversely, this might be advantageous to some navies. One of the clear disadvantages of acoustic communication is its easy interception by the enemy, which necessitates it either being coded – which is only useful until the cipher is broken – or disguised as something innocuous, which for UUVs could be a message appearing like simple ocean background noise. Therefore, says Zheng, “how you can really pick up a very weak signal and then still be able to decode it becomes critical”.

This is complicated by the way the water itself moves. The ocean, explains Zheng, is “actually divided into layers, with different salinity [and] temperature”. Sound bounces between these layers, causing selfinterference, while the movement of the water itself generates a huge Doppler effect. A simple fix for this problem is simply to transmit messages repeatedly, thereby minimising the risk of misunderstanding between operator and drone.

“Now, we have newer methods called turbo equalisation to really [refine] the echoes,” she explains. “Although you’re still saying, ‘Hello, hello, hello’ […] we are actually able to figure out the echoes and add them back together.”

There is, of course, a third option open to military researchers: make the UUV autonomous and eliminate the need for communication with onshore bases altogether. Some degree of independence from the operator is, of course, logical. Unlike UAVs, which effectively fly through empty skies to reach their targets, UUVs are buffeted around by waves, subject to all kinds of weather conditions out at sea, and have to avoid collisions with approaching vessels and reefs. According to Boeing, the Orca is already imbued with this kind of technology, having run autonomously for several months at a time during testing.

$2.7 billion
The cost of the 10-craft autonomous flotilla currently being developed by the US Navy.
US Department of Defense

Presumably, that required an enormous investment of time and resources on the part of the contractor. Why then, if it is so difficult to develop a viable undersea drone, haven’t the world’s navies concentrated on surface equivalents instead?

“We’re not looking at surface vehicles partly because of the culture of the [US] navy,” says Kosal. “In terms of projecting power, nothing does it like sending an aircraft carrier group someplace, or threatening to do that. At this point, projection of power does not come through these unmanned surface vehicles.”

“If they have to go 11,000ft, then they need to reduce the frequency to the sound that [only]elephants or whales can hear, which is something like 10–200Hz.”
Professor Rosa Zheng

This might change soon, though. For governments looking to cut military spending, the absence of a crew on a naval vessel – along with their pay packets – might tempt them to make sweeping changes to their fleets. Another spur to innovation will doubtless be the kind of intractable territorial disputes between great powers that make the deployment of traditional military assets look foolhardy. The South China Sea – where the People’s Republic of China and the US continue to hiss at each other over international shipping’s right of way – is one example.

As such, research into drone surface ships is no longer in its infancy. Earlier this year, the Chinese military unveiled the ‘Marine Lizard,’ a drone-boattank hybrid equipped with heavy machine guns, vertical missile launching silos and capable of reaching speeds of up to 50kt. Primarily designed for close-quarters amphibious combat, the autonomous-capable vehicle has a swimming range of up to 745 miles (although it can only be remotely controlled if its operator is under 31 miles away). In February, China also unveiled the JARI unmanned surface vehicle, a 49ft-long littoral gunboat capable of sailing at up to 42kt.

Then there’s the US Navy’s Sea Hunter surface vessel. 132ft long, the vessel succeeded in sailing from San Diego to Hawaii and back again without a human crew on board (its only physical contact with its flesh and blood operators came during periodic inspections of its propulsion and electrical systems). The US Navy has also announced plans for a modest 10 ship autonomous flotilla costing $2.7 billion, vessels which its deputy assistant secretary for budget said would act as “both a sensor and a shooter”. Meanwhile in the UK, the Royal Navy has earmarked £75 million for two autonomous minesweepers.

While a great deal has been said about the potential advantages of drone warships, the manner in which they will be deployed has received comparatively little attention. Their deployment, for example, might radically upend the likelihood of violent clashes between great powers and ‘rogue states’. Armed with a fleet of UUVs and naval surface drones, the US might be tempted, for example, to wipe out Iran’s fleet in the Persian Gulf without ever fearing US sailors would be in peril during said operation. Conversely, Iran might be more tempted to give the Great Satan a bloody nose in the Persian Gulf in the knowledge that the target they’re striking – however sophisticated it might be – is just a robot.

Assuming, of course, that it is one. One inaccurate intelligence report and the challenger might find themselves victims of a retaliatory strike after accidentally killed three servicemen. “That, then, becomes a very different calculus, particularly when you’re dealing with democracies,” explains Kosal.

Another situation that hasn’t been widely discussed is the role surface drone vessels might be obliged to play in rescue operations. Currently, all manned ships have to assist other vessels in distress. “What happens if you have an unmanned surface vehicle?” asks Kosal. “What happens if we have a migrant boat that capsizes? Do unmanned vehicles have a responsibility to attempt to save those individuals?”

Legal scholars, Kosal concedes, would probably argue that they do. Nevertheless, this can of worms is nothing compared with the veritable barrel of ethical conundrums accompanying the insertion of truly autonomous, AI-driven war machines into the battlefield. Although questions of robot morality are probably a little way off, Kosal predicts they will be answered sooner than we might like, and from unexpected quarters.

“In the next 10 years, the US is likely to remain the leader” in this area of research, she says, while the PRC will continue to explore the possibilities of so-called general AI, deep-learning algorithms capable of accomplishing a wide range of tasks without supervision. “The more concerning [parties] are going to be states like North Korea, Iran, Venezuela and non-state actors. Are they going to be looking for niche capabilities that will be very difficult for the US to encounter?”

As ever, this remains to be seen. However, the race is now on between nations to perfect these machines and write the rules of engagement in their use, lest they are misused. 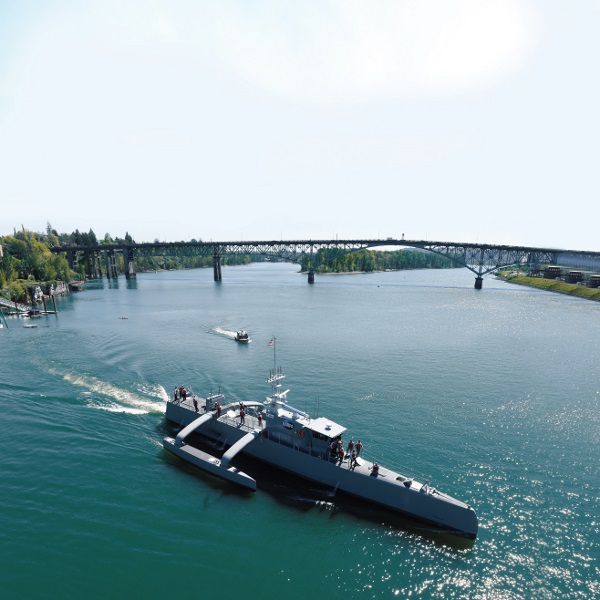 The Sea Hunter UUV on the Willamette River following its christening ceremony in Portland, US. 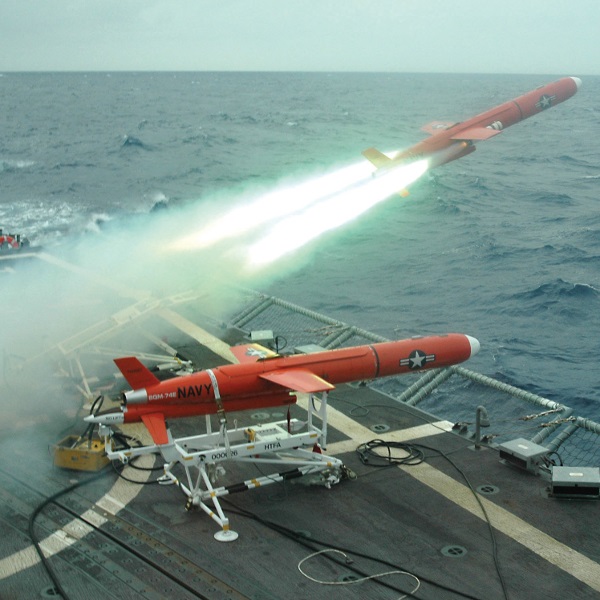