Advances in drone technology and robotics are playing a key role in front-line connectivity, with their use in large numbers enabling the development of swarm research and development. Andrew Barnett speaks with Dr Timothy Chung, programme manager in the Tactical Technology Office (TTO) of the US Defense Advanced Research Projects Agency (DARPA) about how these improvements are providing better visibility and intelligence.

Drones and robots working side by side with soldiers in combat is no longer solely the realm of science fiction films or video games. Recent drone attacks on major oil installations in Saudi Arabia have brought awareness of the power and impact of robotic squadrons to a global audience.

Governments and military forces worldwide have already developed large unmanned aerial vehicles (UAVs) and unmanned ground vehicles (UGVs) that provide effective weapon delivery. They also allow front-line units to stay connected and gather intelligence via suites of on-board radios and sensors. However, UAVs and UGVs are generally expensive and, therefore, usually only deployed either on their own or in small groups.

Advances in commercial drone technology and robotics have the potential to dramatically increase the efficacy of these kinds of unmanned operations. By radically increasing the number of connected platforms used in each operation, forces can better understand enemy positions and weaponry before committing to a high-risk attack.

The information these so-called ‘swarms’ collect can better inform and prepare soldiers ahead of decisive offensive and defensive manoeuvres, and ensure troops are less exposed in dangerous, volatile environments. Swarm formations are expected to prove particularly effective in theatres that pose unique challenges, such as high-rise urban environments.

Elevate to a new level

In the US, the OFFensive Swarm-Enabled Tactics (OFFSET) programme is analysing how large swarms of up to 250 affordable and expendable assets can work together to obtain crucial reconnaissance and intelligence data, required to operate effectively in urban situations.

OFFSET is an initiative of the US military research body DARPA, based in Arlington, Virginia. Launched in 2016, OFFSET aims to advance swarm technologies, techniques and tactics via intensive research that is being dynamically conducted with large industrial partners, academic institutions and small, agile start-ups.

The ultimate goal of OFFSET is to develop a library of around 100 swarm tactics, such as ‘suppress enemy fire’ and ‘assault and clear building’, for possible use by the US Army and US Marine Corps.

The varying demands of urban fighting mean it is vital to be able to understand, and identify, how and when swarm technology can be most effectively deployed and exploited. ‘Swarm sprints’ – or blocks of time during which specific areas of functionality are drilled – are central to this understanding.

To facilitate these sprints, dedicated system integrators have created environments using computer games and open architecture technology that swarm teams use to develop tactics. These digital and physical environments act as test beds, where tactics can be put through their paces in life-like arenas.

Dr Timothy Chung, OFFSET programme manager at DARPA, says the swarm sprints are designed to encourage rapid innovation and continuous incorporation of new players and breakthrough technologies throughout the life of the programme.

“This structure offers the flexibility to inject changing technologies and allow for ad-hoc sprint topics – for example, in thrust areas not previously considered,” he says.

There are five core sprints, each focusing on one or more of the key OFFSET thrust – or topic – areas: swarm tactics, swarm autonomy, human-swarm teaming, virtual environments and physical test beds.

While swarm tactics concentrate on how floods of diverse air and ground robots can work together to conduct urban raids, swarm autonomy provides the opportunity to investigate how members of the swarm interact with the surrounding environment. It also probes how joint decisions should be taken to ensure fluid and effective swarm performance.

Human-swarm teaming allows participants to consider soldier interaction with swarms – an interesting challenge considering both the complexity and the autonomy of the systems. The idea is to develop immersive human interfaces such as virtual reality (VR) and gesture-based techniques that will allow operators to easily monitor and adjust tactics when swarms are already in the thick of the action. This sprint seeks to address the complexity of swarm systems, while also recognising the cognitive and physical needs of active soldiers and tacticians during operations in urban environments.

Striking a balance between the swarm’s autonomy and a need for interaction between soldiers and a swarm is important. “At the heart of the OFFSET programme are the synergies in swarm autonomy and human-swarm teaming. Both research topics present their own unique challenges and opportunities,” says Chung.

The final sprints focus on incorporating new technologies – such as innovative sensor arrays or evolving communication techniques – into the testing environments. “We’re looking for imaginative proposals for component technologies that, when brought together with our OFFSET physical test beds, can lead to technological breakthroughs for future swarm capabilities,” says Chung. “The ability to enhance commercial off-the-shelf (COTS) air and ground platforms can lead to new modes of swarm operations and disruptive swarm tactics for warfighters.”

Innovations such as AI are also being aggressively integrated into the swarm sprints to leverage advances that can accelerate swarm tactics design and keep the programme at the cutting edge of tech.

“One reason AI is such an exciting field is that we have only scratched the surface of possibilities for swarm capabilities,” says Chung. “The OFFSET programme is interested in how AI can accelerate and aid the discovery of novel swarm tactics for operationally guided swarm tactics development.”

The importance of connectivity

“Maintaining communications is always a challenge for robotic applications, particularly in urban environments,” says Chung. “A variety of technologies need to be used to ensure resilient communications, even if that means enhancing the autonomy of agents to endure long periods without connectivity. As the programme continues to expand, reliable communications and networking will be needed for Phase III, where the programme aims to test 250 platforms over the course of four to six hours and covering up to eight city blocks.”

Unmanned vehicles bring with them other logistical and technological challenges that are not only more complicated when used in swarms, but also offer significant additional benefits. For example, sensor size, weight, power and cost are all significant constraints to the development of both individual platforms and swarm units. However, they can also offer some of the most exciting areas of development.

There is already an extensive suite of COTS sensors that can be quickly installed on affordable drones and contribute incredible clarity to the intelligence picture. In addition to well-known addons such as high-definition and thermal-imaging cameras, it is possible to retrofit hyperspacial sensors that analyse the electromagnetic spectrum properties of pixels contained in an image, thereby helping to boost understanding of the composition of materials. In addition, light detection and ranging (LIDAR) devices that are ideal for mapping topographies can be exploited. They illuminate a target with a laser and measure the reflected light to gauge distance.

In large swarm formations, different platforms are able to carry different devices and sensors. When used across a fleet, these have the potential to create an exceptionally detailed picture of the battle arena, allowing surveillance of large and difficult landscapes. Data sources from cameras and sensors can also be linked to satellite telecommunication networks and viewed remotely.

Demonstrating the abilities of swarms in the digital world is one thing, but OFFSET is very much focused on conducting experiments in the field to ensure tactics are battle-ready. Real-word testing also allows system integrators and sprint participants to tackle scenarios designed to shakedown technology advancements achieved during the thrust sprints.

The second of six field experiments took place in June 2019 at Fort Benning, Georgia, and focused on autonomy tactics. The event challenged participants, and their air and ground robots, to not only locate and isolate a major administrative building, but to also secure an objective inside and to maintain a secure perimeter. Similar experiments are being held every six months to maintain and encourage the rapid pace of advancement.

The OFFSET programme offers a fascinating glimpse of a future where military developments move away from high-cost, long-duration projects that require years of ongoing investment and commitment. The future may instead favour intensive, high-impact programmes that offer armies a vast wealth of costeffective information to help protect valuable human resources in tough, urban battlefields. 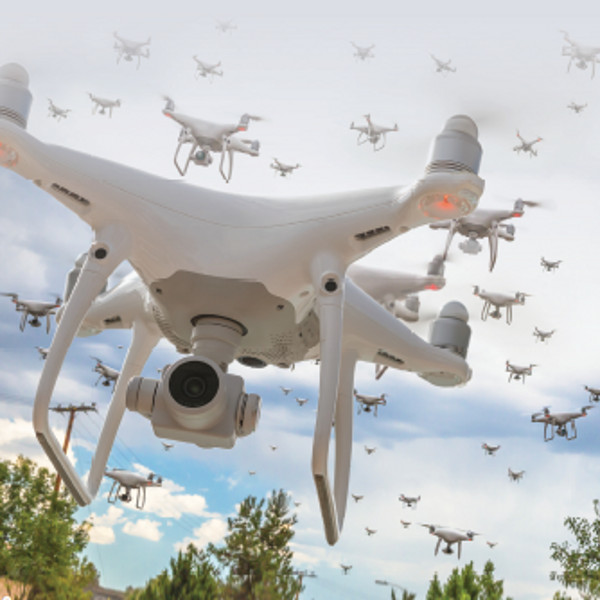 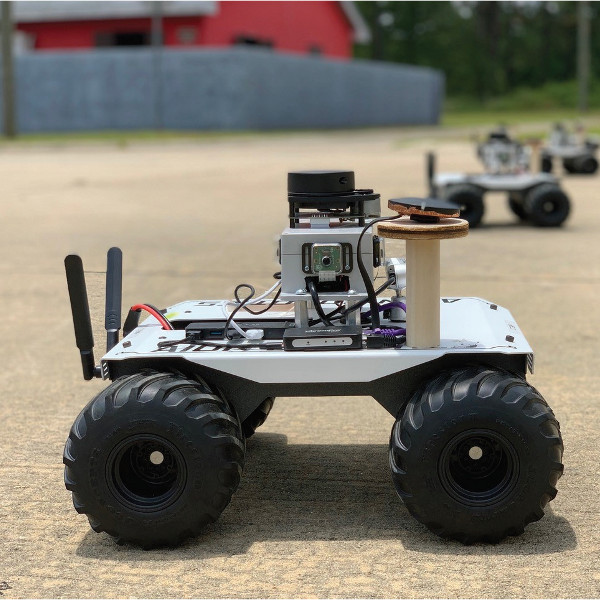 Floods of air and ground robots can be deployed together to conduct urban raids. 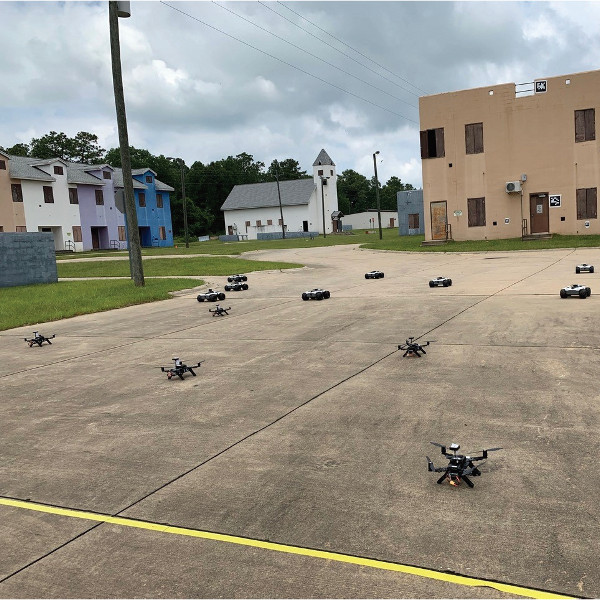 Fort Benning, Georgia: the second of six field experiments in June 2019 focused on autonomy tactics for air and ground robots.
Post to: