In November 2019, the UK Ministry of Defence announced a new multi-billion-pound order for the Boxer, an armoured infantry transport. It may be modular by design and easy to operate, but is it good value for money? Ross Davies investigates by talking to Ben Barry, senior fellow at the International Institute for Strategic Studies, about the addition of this new asset to the British Army’s ranks.

On 22 October 2019, a week before UK lawmakers voted in favour of a snap general election to break a parliamentary impasse over Brexit, the country’s Ministry of Defence (MoD) began its review of a business case for the order of over 500 new armoured fighting vehicles.

The object of the MoD’s scrutiny was the Boxer, a German-manufactured, eight-wheeled vehicle previously deployed by the Bundeswehr in Afghanistan. Pressed to make a decision before election night on 12 December, the business case was upheld as good value for money by the MoD’s Investment Approvals Committee (IAC) within just two weeks. Approval from the IAC – a powerful organisation within the MoD, which presides over all major acquisition proposals – was good enough for Ben Wallace, the UK’s defence secretary, as well as the Treasury, which green-lit the order of 508 Boxer vehicles to the tune of £2.8 billion.

With the deal agreed upon with the Organisation for Joint Armament Cooperation (OCCAR) – the European intergovernmental group that promotes collaborative armament programmes – and Artec, a joint venture led by Germany’s Rheinmetall-Krauss- Maffei Wegmann (KMW), the UK wasted no time in signing the contract, which was due to expire on 31 December, 2019.

The swiftness on the MoD’s part was deliberate, with the ministry wary that any further political upheaval in the UK as a result of the election could lead to OCCAR and Artec increasing their price or, worse, the deal being scuttled. The ministry has high hopes for the Boxer, which is scheduled to enter service in mid-2023. As a high-mobility, networkenabled armoured vehicle used to transport troops to the front line, it is banking on it to help modernise the British Army’s ground force capabilities.

Alongside the Ajax family of land vehicles, for which delivery is currently pending, the Boxer will form part of the army’s ‘Strike’ brigades, the new units arranged to deploy rapidly over long distances across a variety of terrains.

The MoD has made a savvy purchase, according to Ben Barry, senior fellow at the International Institute for Strategic Studies (IISS), a UK-based think tank.

“Clearly, it’s an expensive deal, but if you look at the army’s central idea – the Strike brigade concept – the Boxer is good value for money,” says Barry, who previously served as a brigadier in the British Army. “Not only is it the most modern option, but it is also the best protected. It has great stretch potential.”

A quick glance at the Boxer’s specifications reveal a vehicle that is 26×10ft in length and width, weighing up to 38.5t. Boosted by an 800bhp pack, together with a maximum transition unit engine, the vehicles are able to reach speeds of up to 70mph, regardless of the terrain. They are capable of operating in extreme temperatures, ranging -32ºC to +49ºC.

“Clearly, it’s an expensive deal, but if you look at the army’s central idea – the Strike brigade concept – the Boxer is good value for money.”

The Boxer is also compatible with a number of remote weapon stations. It can be fitted with smoke grenade launchers and anti-tank guided missiles, while its artillery gun module is able to house a remotecontrolled 155mm howitzer, capable of firing eight rounds per minute at a range of up to 40km.

The vehicle also has a turret feature, able to accommodate two operators, with 360º electric rotation. Other bells and whistles it can incorporate include laser rangefinders, CCTV cameras, thermal imagers and ECM jammers.

8
Rounds per minute can be fired by a Boxer howitzer.
Artec

But it is the Boxer’s flexibility that makes it so appealing to the armed forces. The same vehicle base can be refigured to carry out a number of operations, from transporting troops across the desert to treating injured personnel en route to hospital, akin to an ambulance. Capable of being carried by A-400 and C-17 military aircraft, it is also eminently suitable for air-deployed interventions.

“The Boxer has been designed for a very high degree of modularity,” says Barry. “The German companies that built these vehicles [Rheinmetall acquired rival Krauss-Maffei Wegmann in 2018] are two of the most credible armoured vehicle manufacturers in the world.”

Back in the ring

The UK’s involvement in the Boxer programme can be traced back to the turn of the millennium when, as part of a joint venture with France and Germany, it awarded the first contract for eight prototype vehicles in 1999.

Despite its key role in the early development and testing of the new armoured vehicle, in 2003 the UK government withdrew from the project, citing concerns that it was too heavy for transportation by the Royal Air Force. But Barry believes there were other factors behind the withdrawal.

“Around this time, the British Army became quite enamoured with Future Combat Systems, a very futuristic programme in the US, the goal of which was to produce an ultra-modern, high-tech armoured vehicle that could fit inside a C-130 Hercules and be flown anywhere in the world,” he explains.

“The trouble was that this programme went well beyond what was technologically feasible at that time. It leaked a lot of money before it was finally stopped, and British expectations that they could have something similar went with it. By that point, the UK also started to become preoccupied with what was happening in Iraq.”

No sooner had the UK opted out of the European Boxer programme than its newest member, the Netherlands, delivered the first prototype of the vehicle in 2003. Since then, the Netherlands and Germany have developed hundreds of the vehicles, with more recent orders coming from the Lithuanian, Australian and Slovenian armed forces. As a standardised vehicle operated across several jurisdictions, the idea is that the Boxer can facilitate better interoperability between these ally states.

The UK rejoined the programme in 2018, reassuming the rights it had originally enjoyed as a main project partner. In March of that year, the MoD negotiated a deal with OCCAR to ensure that at least 60% of the programme’s production lines would be based in the UK. The vehicles are expected to be built at BAE’s Hadley Park facility in Shropshire, as part of a joint venture between the defence group and Rheinmetall, known as RBSL. The new contract is forecast to create up to 600 new jobs, while Thales, Rolls-Royce, WFEL and Parker Hannifin will also make up the UK’s production effort.

“There shouldn’t be too much of a problem bringing the Boxer into service in the UK,” says Barry. “As the vehicles are already in service with other armies, many of the initial teething problems around production have already been ironed out. So, in some ways, the UK has benefitted from stepping back as programme leader.”

The only time Barry voices any reservation over the Boxer is the claim that it can be converted from an infantry vehicle into an ambulance (“I’m not sure how feasible that is”). But aside from the traditional challenges that come with building a new armoured vehicle, the Boxer’s biggest asset lies in its simplicity.

“It’s not rocket science – the Boxer is a very simple vehicle,” he says. “It has a big engine at the front, an advanced suspension, a command post and space at the back for what it has to carry. If you look upon Ajax – which uses lots of high technology and electronic surveillance – as the military equivalent of a digital racing car, the Boxer is a white van, albeit a very modern one.”

Some might consider the comparison to be unflattering, especially given that the Boxer’s intended purpose is to help modernise the army’s warfighting efforts. But history’s most successful armoured vehicles, such as Germany’s Marder and Leopard tanks, all share the same attribute, says Barry – practicality.

60%
Production lines for the Boxer will be situated in the UK.
£2.8bn
The amount paid by the UK government for the delivery of 508 Boxer vehicles.
UK Ministry of Defence 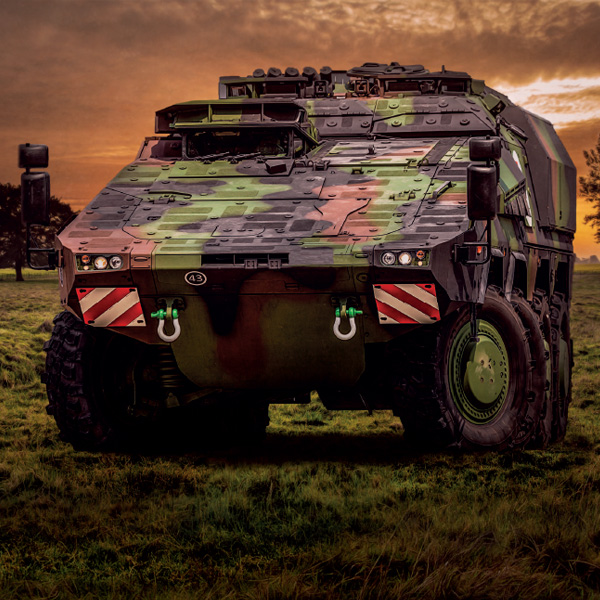 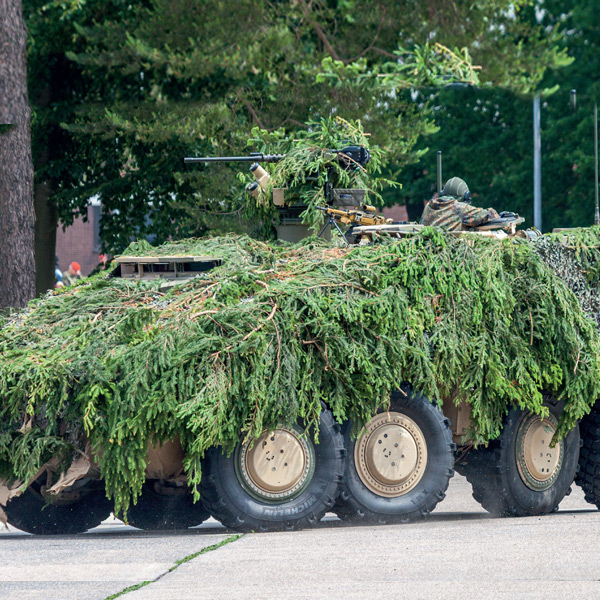 The GTK Boxer drives on a tactic demonstration at public event ‘Day of the Bundeswehr 2019’.
Post to: